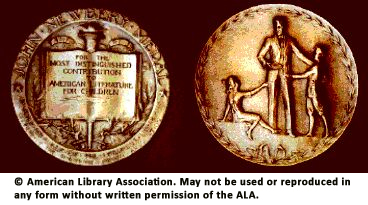 In 1921 Frederic G.Melcher had the Newbery Medal designed by René Paul Chambellan. The bronze medal has the winner's name and the date engraved on the back. The American Library Association Executive Board in 1922 delegated to the Children's Librarians' Section the responsibility for selecting the book to receive the Newbery Medal.

The inscription on the Newbery Medal still reads "Children's Librarians' Section," although the section has changed its name four times and its membership now includes both school and public library children's librarians in contrast to the years 1922-58, when the section, under three different names, included only public library children's librarians. Today the Medal is administered by the Association for Library Service to Children, a division of ALA.

How the Newbery Medal Came to Be

The Newbery Medal is awarded annually by the American Library Association for the most distinguished American children's book published the previous year. On June 22, 1921, Frederic G. Melcher proposed the award to the American Library Association meeting of the Children's Librarians' Section and suggested that it be named for the eighteenth-century English bookseller John Newbery. The idea was enthusiastically accepted by the children's librarians, and Melcher's official proposal was approved by the ALA Executive Board in 1922. In Melcher's formal agreement with the board, the purpose of the Newbery Medal was stated as follows: "To encourage original creative work in the field of books for children. To emphasize to the public that contributions to the literature for children deserve similar recognition to poetry, plays, or novels. To give those librarians, who make it their life work to serve children's reading interests, an opportunity to encourage good writing in this field."