From the moment European settlers arrived in what would become the United States, the cultural impact would be felt by indigenous tribes throughout America--including the Midwest--long before actual contact was made.

The period before the first European contact with the indigenous tribes that were living in Indiana is sometimes referred to as protohistory. The protohistory is important to take into account when looking at the tribes in Indiana because their culture was already affected by European diseases brought to America and the push westward of Eastern tribes, as more Europeans settled in the new colonies.

Very early in its history, Indiana would act as the crossroads for the nation before it even had the nickname, as tribes traveled to and through the Indiana territory. Over the years, Indiana was considered home to several different indigenous tribes, like the Miami, Wea, Piankashaw, Shawnee, Eel River, Delaware and Potowatomi. There were many other indigenous tribes that also had a scattered presence in Indiana at various points in history, like the Kickapoo, Odawa, Chippewa, Wyandot, Kaskaskia, Mahican, Nanticoke, Huron, Mohegan, and many others.

The earliest accounts of the Great Lakes nations came in the early 1600s by French Jesuit missionaries. Indiana’s indigenous tribes would be heavily influenced by these early French encounters. The French and Midwest tribes maintained a thriving fur trade in the Great Lakes area. Intermarriage was common among the trade groups and a practice that strengthened the trade relationships. Little changed in these practices under the initial shift to British rule for the Indiana indigenous tribes. However, following the Treaty of Paris in 1783 between the British and the United States, the British ceded all British territories east of the Mississippi to the United States government. This put any matters concerning the indigenous tribes under the control of the newly created United States federal government.

The 1795 Treaty of Greenville gave a substantial amount of land in Ohio and part of the eastern border of Indiana to the United States and in 1816 the territory became Indiana and joined the union.

Notably, Tecumseh of the Shawnee nation was not among the tribal leaders who signed the Treaty of Greenville and the several treaties for Indiana lands that followed. Tecumseh believed that the land could not belong to any one entity. This frustration and resentment as more settlers moved into the territory would be a driving force for Tecumseh and his followers to side with the British in the War of 1812.

The War of 1812 was between the United States and Great Britain. Both sides gathered allies among the indigenous tribes in the area. Although for the two nations the war seemed to have ended in a stalemate, the effect the war would have on Great Lakes tribes would be felt for years to come. As historian Donald Hickey said “The big losers in the war were the Indians...The crushing defeats at the Thames and Horseshoe Bend left them at the mercy of the Americans, hastening their confinement to reservations and the decline of their traditional way of life.” (2013) The United States would now use British allegiances as cause for further land cessations.

Following the War of 1812, many tribes now faced more pressure and sometimes the forced cessation of lands they once called home. The treaties of 1838 and 1840 for lands south of the Wabash river would essentially mark the last cessation of indigenous lands to the United States in the state of Indiana.

At this same time, President Andrew Jackson had been passing the Indian Removal Act of 1830. Although treaty negotiations had been going on with various tribes throughout the nation, President Jackson’s Indian Removal Act would accelerate the treaty processes by allowing the president to extinguish "as he may judge necessary" title to any lands occupied by the Indians in exchange for lands to the west.

At this point in time, the Wea and Shawnee had already left westward. This left the Potowatomi and Miami as the last tribes with significant representation in Indiana. In 1838, the Potawatomi Indians, who lived in Northern Indiana, were forcibly removed from their ancestral homelands by order of the United States government.

859 Potawatomi were led by militia across Indiana, Illinois, and Missouri until they finally reached the government’s destination for their tribe in Kansas. In his book, True Indian Stories, historian Jacob Piatt Dunn is credited with naming this journey ‘The Trail of Death’ because 41 people would die during this forced removal.

Through the cessation of land and the forced removal of tribes from Indiana, the indigenous population was drastically depleted starting in the nineteenth century and never quite recovered.

Today, one can find instances of historical societies working to educate the public about the history of Indiana. In northern Indiana, a living history festival was started in 1976 called The Trail of Courage. Each year at the Trail of Courage, a different Potawatomi family is honored, that had ancestors who had walked on the Trail of Death or signed treaties in Indiana.

Every five years since 1988, the Potawatomi Trail of Death Commemorative Caravan travels the 660-mile trip from Indiana to Kansas. The markers along the trail are reminders to everyone of the once-thriving people who had been forced from Indiana on a journey that would cost both lives and the loss of their ancestral homes.

To explore topics both present-day and historical of the Indigenous people of Indiana, please visit the following centers or check out the following websites: 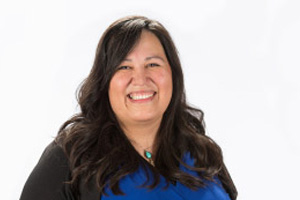 Tara Kenjockety is part Seneca Nation and an enrolled member of the Ho-Chunk Nation of Wisconsin. She received her Bachelor of Arts in Anthropology in 2002 and her Master of Science in Library and Information Science in 2008 from Indiana University. After working in the public library system, Tara decided to focus on integrating information literacy into the curriculum for adult education students in South Bend, Indiana. While there, she served on the Indiana adult education board and provided several professional development trainings throughout the state for adult education instructors. Currently, Tara works at the Hesburgh Library at the University of Notre Dame. At Notre Dame, Tara served on the campus Staff Advisory Council, the Hesburgh Library Diversity and Inclusion committee, and is a founding member of the employee resource group on campus for Indigenous People. Tara also works with the Native American Initiatives (NAI) at Notre Dame and the Native American Students and their allies group.