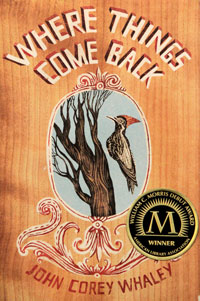 Where Things Come Back by John Corey Whaley, published by Atheneum Books for Young Readers, an imprint of Simon & Schuster Children's Publishing.  ISBN 978-0-4424-1333-7.

Lily, Arkansas, seems like a sleepy town where it would be unlikely for anything of note to the outside world to happen. But Cullen’s seventeenth summer is marked by the overdose death of a relative, his brother’s disappearance, and the discovery of a woodpecker thought to be extinct. These seemingly disconnected events collide in this novel which demonstrates that nothing is random.  Whaley’s story will absorb readers as they follow Cullen on his journey through an unforgettable summer.

“With plot twists and surprising connections, this is one of those rare books that does not come along often,” said Morris Award Chair Teri Lesesne.

The Girl of Fire and Thorns written by Rae Carson, published by Greenwillow Books, an imprint of HarperCollins Publishers.  ISBN 978-0-06-202648-4.

Elisa bears the Godstone.  She is a chosen one.  What she is chosen to do is unclear, but perhaps her journey to marry the king of a neighboring country in the midst of war will provide some of the answers.  Carson weaves together religion, politics, prophecy,  and more in this fast-paced fantasy that brings Elisa to a destiny  no one could have anticipated.

Alex, a junior at an exclusive boarding school, uses his journal (neatly hidden inside a copy of Moby Dick) to relate the disturbing events that led to the drowning of a classmate.  Hubbard’s literary references, her creation of Alex’s poems and journal entries, and her storytelling skills combine in a story about the code of silence that often compromises the code of honor.

This novel in verse tells the story of Lupita, the oldest of eight children.  When Lupita’s mother is diagnosed with cancer, it is up to Lupita to step into a role she never considered taking in her drama class:  surrogate parent.  McCall’s chapters are exquisite poems with language that sings and stings.  Finding hope amidst despair, finding the chance to laugh, and finding the incredible power of family  make this a memorable reading experience.

In lyrical prose, Sepetys introduces readers to 15 year old Lina and her family as they are evicted from their home in Lithuania  and transported to Siberia as prisoners during Stalin’s reign of terror in the 1940s.  The journey is perilous; not all will survive. Lina is determined to document it all in her art and her journal. Sepetys shines a light on a corner of history not often seen in YA literature. The juxtaposition of lyricism in the midst of the horror underscores Lina’s indomitable spirit.