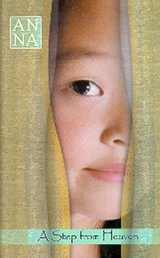 A Step from Heaven
By An Na
Front Street

An Na is the winner of the Michael L. Printz Award for excellence in literature for young adults. "A Step from Heaven," published by Front Street and edited by Stephen Roxburgh, tells the tale of Young Ju as she grows from a toddler in Korea to a high-school graduate in California desperately trying to be a 'true' American while her immigrant parents try to make her stay close to her Korean heritage.

"Both intimate and universal, this powerful story of Young Ju's coming of age is rooted in the conflict between her traditional Korean immigrant family and the need to find her place in the United States," said Judith A. Druse, chair of the Printz Award Selection Committee. "Each chapter is a stirring story, and together these lyrical vignettes create a heartfelt account of every teen's struggle between family and self."

Na was born in Korea and grew up in San Diego. "A Step From Heaven" is her first novel. Four Printz Honor Books were named: "Heart to Heart: New Poems Inspired by Twentieth-Century American Art," edited by Jan Greenberg and published by Harry N. Abrams, Inc., Publishers; "Freewill" by Chris Lynch, published by HarperCollins Publishers; "The Ropemaker," by Peter Dickinson, published by Delacorte Press; and "True Believer," by Virginia Euwer Wolff, published by Atheneum Books for Young Readers.

The Ropemaker
by Peter Dickinson
Delacorte