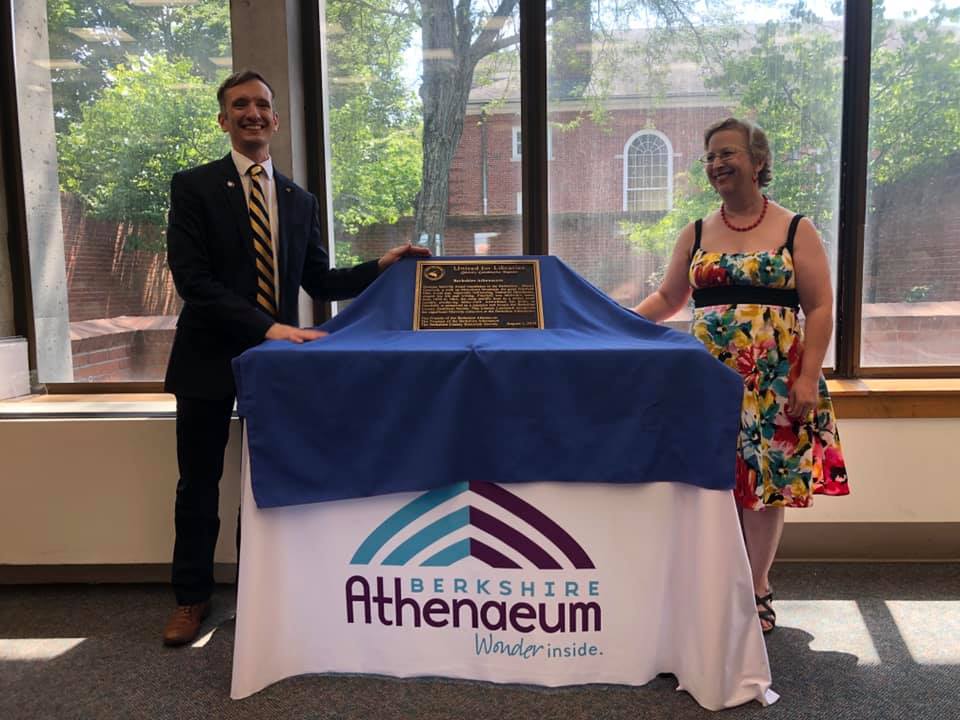 In a celebration marking the 200th anniversary of Herman Melville’s birth, The Berkshire Athenaeum in Pittsfield, Massachusetts was officially designated a Literary Landmark on Thursday, August 1 at 1:00 PM. Herman Melville lived in Pittsfield from 1850 to 1863, his most prolific time as a writer and the place where he wrote “Moby-Dick, or The Whale” (1851), “Pierre, or The Ambiguities” (1852), “Israel Potter: His Fifty Years in Exile” (1855), “The Piazza Tales” (1856), “The Confidence Man” (1857), and began his work “On Battle Pieces And Aspects Of War,” “Clarel, A Poem And Pilgrimage In The Holy Land,” and other works.

For over 75 years the Berkshire Athenaeum has been the home of the largest collection of Melville Family Personal Memorabilia in the world, as well as one of the largest research collections available for the pursuit of scholarly research pertaining to the life and work of Herman Melville. Melville scholars from around the world come to the Berkshire Athenaeum to take advantage of the collection and have graciously contributed copies of their books, articles and research, helping to maintain the importance and relevance of the collection.

The Herman Melville Memorial Room was established in 1953, through the planning and generosity of Dr. Henry A. Murray of Harvard University. In addition to Dr. Murray, the principal donors were Eleanor Metcalf, Frances Osborne, Katherine Binnian and Jeannette Chapin, granddaughters of Herman Melville, and his grandnieces, Agnes, Helen and Margaret Morewood. The collection has been enhanced in recent years by gifts from Paul and Nancy Metcalf and from the descendants of Thomas Melvill, Jr. (Herman Melville’s mother later added the “e” to the family’s last name.)

Kathleen Reilly, Local History & Melville Collections Curator and expert for the past 40 years, welcomed two of Melville’s descendants, Peter Whittemore and Rebecca Weinman, to the proceedings and expressed gratitude to them as representatives of their forward-thinking and generous ancestors.

Mayor Linda Tyer read a charter to the gathered audience and spoke of the city’s commitment to education and literacy programs, as well as her support of the library as source of programming for people of all ages, all demographics, all economic situations.