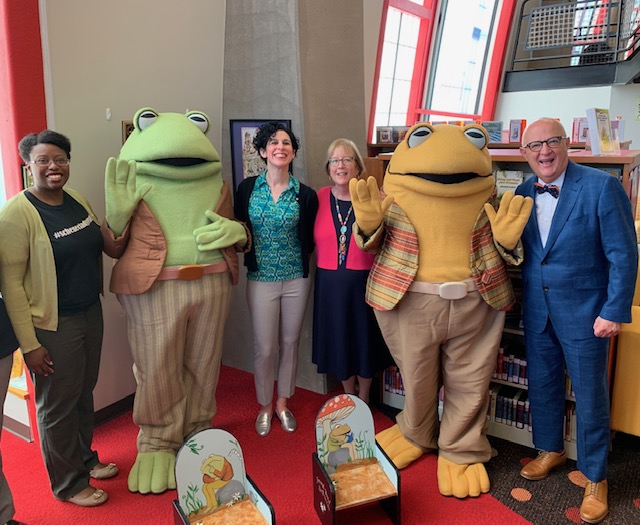 Schenectady County Public Library was dedicated a Literary Landmark on May 22, 2019 in honor of children’s author and illustrator Arnold Lobel, who was best known for the Frog and Toad series.

Born in Los Angeles, California, and raised on Baker Avenue in Schenectady, Lobel amassed one Caldecott Medal, 3 Caldecott Honors, and one Newbery Honor during his 26-year career as a children’s book author and illustrator. As an adult, he was ranked among the most highly decorated authors and illustrators in children’s literature, and as a boy Lobel spent many hours at the Schenectady County Public Library.

The celebration was kicked-off by Karen Bradley, Library Director, and included remarks from Rocco Staino, Empire State Center for the Book and Chair of the NYLA Literary Landmarks Committee, Chinasa Seyse, Youth Services Librarian and Member of the 2019 Randolph Caldecott Award Committee, and Kaela Wallman, Coordinator of Youth Services.

In addition to library Trustees, members of the Friends of the Library, Youth Services staff from the Mohawk Valley Library System and Upper 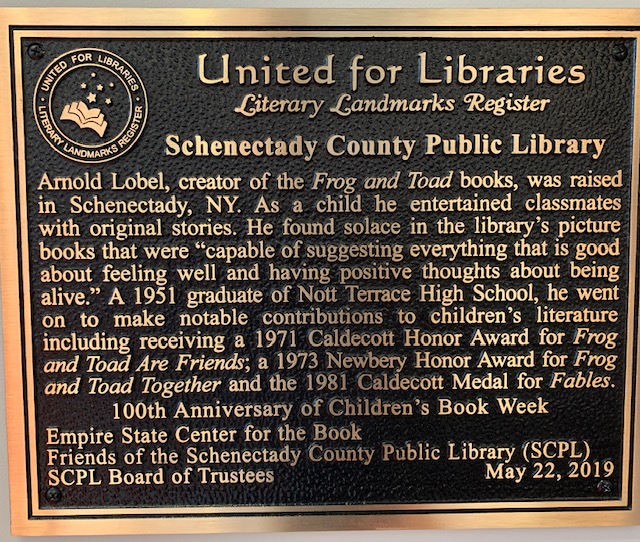 Hudson Library System, children from Schenectady Day Nursery, and families from the community, Senator Kirsten Gillibrand’s aide Caitlyn was in attendance, in addition to media from WRGB, Channel 6 and Spectrum News.

The Literary Landmark, in commemoration of the 100th Anniversary of Children’s Book Week, was made possible by Empire State Center for the Book, contributions by Friends of the Schenectady County Public Library, the Library Board of Trustees, and Herb and Cynthia Schultz.

The landmark plaque, in part, reads Lobel enjoyed the library’s “picture books that were capable of suggesting everything that is good about feeling well and having positive thoughts about being alive.”