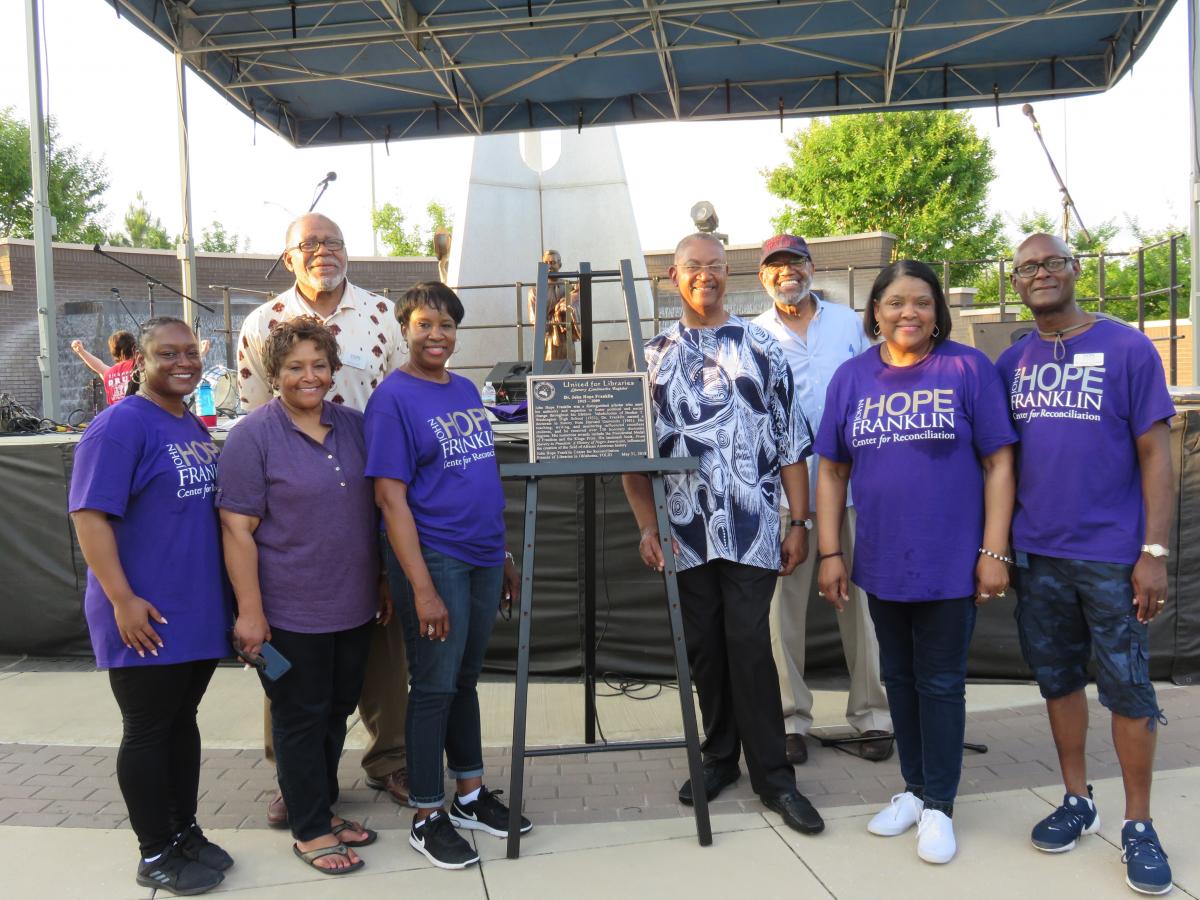 The John Hope Franklin Reconciliation Park in Tulsa, Oklahoma, was dedicated a Literary Landmark in honor of the late Dr. John Hope Franklin (1915-2009).  Born in the all-Black town of  Rentiesville, Oklahoma during legal segregation. His landmark book, “From Slavery to Freedom: A History of African Americans,” first published in 1947,  is now in its 10th published edition.

A gifted scholar, Franklin graduated as valedictorian of Tulsa’s Booker T. Washington High School, Class of 1931.  His college career began at  HBCU Fisk University graduating in 1935 where he met and married Aurelia Whittington in 1940,   He earned both his master’s degree and Ph.D. in history from Harvard University 1936 and 1941, respectively. He held professorships at Fisk University, Saint Augustine’s College (Raleigh, NC)  North Carolina Central University (Durham)  and Howard University (Washington, D.C.).  Subsequently, he chaired the Department of History at Brooklyn College, University of Chicago and  was named to the endowed position of John Matthews Manly Distinguished Service Professor of History, receiving emeritus status. He was appointed as the James B. Duke Professor of History Emeritus at Duke University and Professor of Legal History in the Law School.  In 1997 he was appointed  chair of a seven member advisory board for President Bill Clinton’s Initiative on Race, “One America in the 21st Century.”

Franklin was a distinguished scholar,  historian, author and educator. He served as the 18th President of The Phi Beta Kappa Society, and several national organizations often times, the first African-American to do so, including the American Studies Association (1967), the Southern Historical Association (1970), the Organization of American Historians (1975) and the American Historical Association (1979).    Among his many awards were the Charles Frankel Prize, recognizing scholarly contributions that give “eloquence and meaning…to our ideas, hopes and dreams as American citizens.”  The Encyclopedia Britannica Gold Medal for the Dissemination of Knowledge, given to an individual in recognition of their “excellence in the dissemination of knowledge for the benefit of mankind.” He was awarded the Presidential Medal of Freedom, the nation’s highest civilian honor in 1995 as well as the prestigious NAACP Spingarn Award.  In 2001, Duke University established the John Hope Franklin Humanities Institute and the John Hope Franklin Center for Interdisciplinary & International Studies.  He was one of America’s most esteemed historians and scholars.  As an eminent scholar he was chosen to give State Department and United States Information Service lectures throughout the world. Over his lifetime he was awarded over 130 honorary doctorates as well as countless literary awards and served on many boards and commissions.

The Literary Landmark dedication took place on the anniversary of the 1921 Tulsa Race Riot/Massacre. The ceremony began at the corner of Archer Street and Greenwood Avenue, the heart of the once thriving African-American business district, with a memorial walk to the Park, then opened with a welcome from Reuben Gant, Executive Director of the John Hope Franklin Center for Reconciliation, and a prayer offered by Reverend Debra Garfinkel. Tulsa City Councilor Vanessa Hall-Harper and State Representative Regina Goodwin read city and state proclamations, respectively. The ceremony was hosted by OSU Library Professor Karen Neurohr and Tulsa writer Michael Wallis. The Taylor Entertainment Jazz Trio and the Reconciliation Community Choir provided musical entertainment during the ceremony along with a live painting by Oklahoma City artist Dawn Tree.

Mr. John W. Franklin, son of Dr. John Hope Franklin and Senior Manager, Office of External Affairs, Smithsonian Institution National Museum of African American History & Culture, delivered a dedication speech as he accepted the award on his father’s behalf. The dedication was live-streamed on Facebook by the Center for Poets and Writers at OSU-Tulsa.