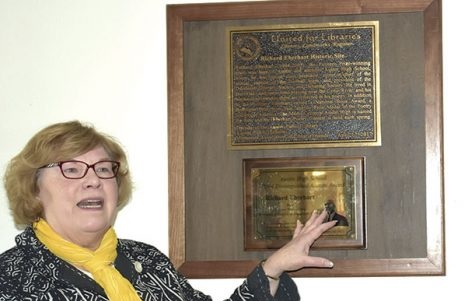 Austin High School was dedicated a Literary Landmark on April 17 in honor of poet Richard Eberhart (1904-2004). The site was chosen because Eberhart, an alum of the school, stood out as an emerging superstar even during his high school years. There, faculty nurtured Eberhart’s young talent, and primed him for future success.

Born in Austin in 1904, Eberhart spent his formative years at the family’s 40-acre estate just outside of town. While he enjoyed a privileged and happy childhood, financial setbacks and the unexpected death of his mother marred his later adolescence. Much of his Pulitzer Prize- and National Book Award-winning poetry is inspired by both the highlights and travails of his childhood in Austin.

The dedication ceremony took place at Austin High School on April 17, 2017. Shortly after, attendees walked across the street to the Hormel Historic Home to see the final round of the 2017 Richard Eberhart Poetry contest. Twenty-four finalists – three from each of the district’s eight schools – read original works aloud.

"Seeing kindergarten kids read a poem they wrote, and in front of a large audience, showed the influence that this special local poet has had on many generations of children," noted MALF president Judy Schotzko.