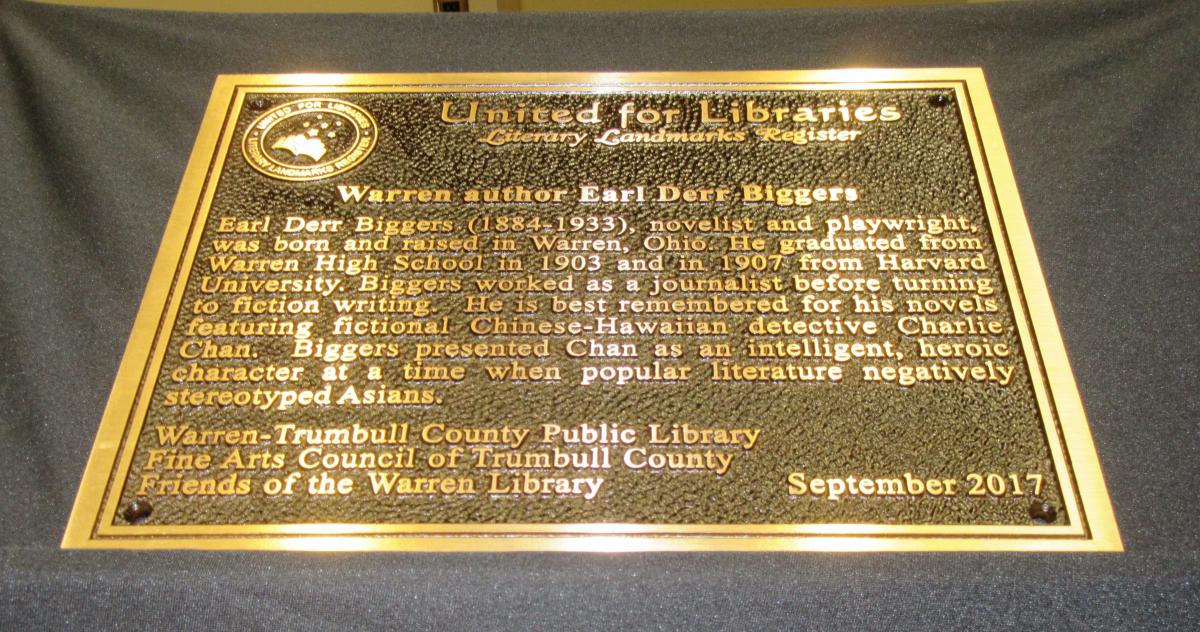 A Literary Landmark plaque honoring author and playwright Earl Derr Biggers (1884-1933), creator of the Charlie Chan detective novels, was unveiled during a ceremony at the Warren-Trumbull County Public Library. Biggers was born and raised in Warren, Ohio before leaving to make his mark on the literary world.
A talk about the Literary Landmark, Biggers, and his works was shared with two dozen attendees. Many artifacts relating to Biggers were available for viewing, including original copies of The Cauldron, a monthly literary magazine created when Biggers was a senior at Warren High School; an original 1915 playbill from a New York production of Biggers’s play “Between the Lines”; a photo of Biggers with his 1903 high school graduating class; and a tri-fold board of witty sayings gleaned from the Charlie Chan novels.
Following the formal presentation, an announcement was made that the first book in the Charlie Chan series, “The House Without a Key,” would be the library’s reading choice for One Book/One Community in March of 2018. Refreshments were served and the audience shared their recollections of Charlie Chan. The following day, two movies were shown at the Main Library: a Charlie Chan film and one of the many film adaptations of Biggers’ successful first novel “Seven Keys to Baldpate”.
The Landmark plaque will be permanently displayed at the Main Library in Warren near the Local Author Collection.
Resources: Warren-Trumbull County Public Library