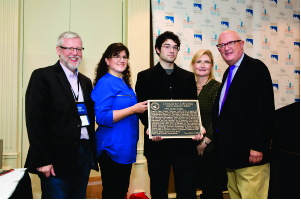 Francis John "Frank" Sullivan (1892-1976) lived at 135 Lincoln Avenue in Saratoga Springs for most of his adult life. Affectionately known as “The Sage of Saratoga,” the 1914 graduate of Cornell University, started his writing career at The Saratogian Newspaper. He worked as a journalist at The Herald, The Evening Sun and New York World in Manhattan for two decades. Sullivan's writings were the focus of the Saratoga Reads community-wide reading and discussion initiative in 2017.

The Literary Landmark was unveiled at a Literary Luncheon sponsored by Empire State Center for the Book and held at the Saratoga Hilton. Present for the unveiling were Julye Spinelli and her son Alexander Spinelli, who live at the house which was landmarked. Also attending the unveiling were Sara Sachs, president of the Friends of Libraries Section of the New York Library Association, and Rocco Staino, director of the Empire State Center for the Book.