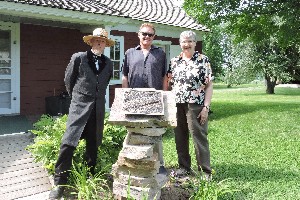 The Wilder Homestead was dedicated a Literary Landmark in honor of author Laura Ingalls Wilder (1867-1957).

Laura Ingalls Wilder first wrote about her childhood growing up on the American frontier in Little House in the Big Woods (1932).  She then immortalized the boyhood home of her husband, Almanzo, in Farmer Boy (1933), the second title in the “Little House” series.  The novel chronicled one year in Almanzo’s life on the farm near Malone where he lived and worked from his birth in 1857 until 1875, when his family moved to Minnesota.

The museum planned a day of celebration in conjunction with their annual art event for children.  Adirondack folksinger Roy Hurd performed before the ceremony and the winners of the art contest for fourth graders were announced.  Among those attending the dedication was Lisa C. Wemett, president of the Friends of Libraries Section of the New York Library Association (NYLA), representing both the library association and the Empire State Center for the Book.  Wemett worked with the eight sections of NYLA to raise funds for the plaque for the Homestead.  2015 is the 125th birthday of the state library association founded by Melvil Dewey in Lake Placid.  “It seemed fitting to give northern New York a gift in recognition of this anniversary year.  We are pleased to provide this legacy, which brings national recognition to the museum, with its strong connection to literature for young people,” said Wemett.

The Wilder Homestead is the first Literary Landmark in northern New York and the sixteenth in New York State.  It is the only “Little House” site to receive this recognition from United for Libraries.  This original homestead of Almanzo Wilder’s family is on the New York State Register of Historic Places and in December 2014 it was named to the National Register of Historic Places.

Museum volunteer Jim Lusk, who portrays Almanzo’s father James Mason Wilder, served as master of ceremonies and helped to unveil the plaque.  Homestead Vice-President Ken Carre had constructed a pedestal of locally quarried stone which holds the plaque, surrounded by the kitchen garden at the farmhouse’s entrance.  Historian and award-winning author William Anderson of Lapeer, Mich., spoke about the “Little House” series and the significance of the Wilder family and Homestead to northern New York.

Anderson took the opportunity to present the 2015 “Laura’s Legacy Award” from the Laura Ingalls Wilder Legacy and Research Association to Sally House and her late husband Lawrence of Potsdam, New York.  Originally of Malone, Mr. and Mrs. House were instrumental in bringing the Wilder farm to the attention of local residents and establishing it as an historical site.  The annual award recognizes individuals who have made an outstanding contribution toward the preservation of Laura Ingalls Wilder’s legacy.