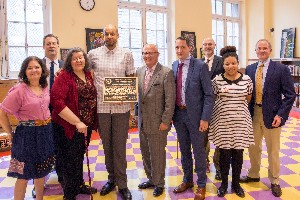 Noted children’s and young adult author Walter Dean Myers (1937-2014) was honored during Children’s Book Week with the dedication of a Literary Landmark.  A plaque was unveiled on May 4, 2015, at the George Bruce Branch of the New York Public Library in honor of Myers, who used the branch library in his childhood.  The event was the kick-off event for Children’s Book Week.  Myers, who died on July 1, 2014, at the age of 76 was the author of more than 100 books, and served as the Library of Congress National Ambassador for Young People’s Literature.

Walter Dean Myers wrote about growing up in the George Bruce neighborhood and about using the library.

In Walter’s memoir, Bad Boy, he wrote: “Harlem is the first place called ‘home’ that I can remember.” This sentiment is reflected in Walter’s writing, whether via a love letter to the neighborhood in the picture book Harlem; a story of a boy’s trial for a crime committed in Harlem, in the novel Monster; or the tale of two friends struggling to see a future beyond the community they know in the novel Darius & Twig. Walter spent much of his childhood playing basketball on the courts of Harlem and checking books out of the George Bruce Branch of the New York Public Library. Florence Dean taught Walter to read in their kitchen, and when he began attending Public School 125, he could read at a second-grade level. Though Walter struggled through school with a speech impediment and poor grades, and he had trouble with discipline throughout his school career, he remained an avid reader. His love of reading soon progressed to a love of writing.