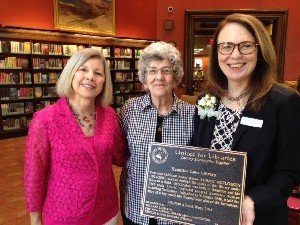 The following remarks were made by Gratia Banta, youth services manager of The Lane Libraries, ALA/United for Libraries member, and Heritage Hall board member:

Our Landmark celebrates The Hamilton Lane Library -- one of the first free libraries west of the Allegheny Mountains, where two-time Caldecott Award winner Robert McCloskey walked through these doors many times as a child. This is the building that McCloskey referenced for the Alto Library in Lentil. And this is the street corner where he drew a young boy playing a harmonica. McCloskey was born in Hamilton in 1914 and his first book Lentil, featured several Hamilton scenes including this Library.  Published by Viking in 1940, Lentil told the story of a boy much like McCloskey who played the harmonica. Now in its 149th year, the Hamilton Lane Library retains many links with its founder Clark Lane. Standing in front of the Library today, one can view a facade remarkably similar to how it was first described in 1866. As quoted by James E. Schwartz, Ph.D. author of Lane Public Library: Commemorating the Years 1866-1997, “The visitor who strolls up Third Street cannot fail to notice on the East side of that street, standing inside a neat iron fence a beautiful octagon structure. Its walls of brick with window and door casings of dressed stone, and a roof of variegated slate is surmounted by a cupola with stained glass windows. Also of note, please observe the weather vane on top: a book transfixed by a quill.  If you look across the street you will see the house of its designer and builder, Mr. Clark Lane.”