Westerly, R.I. Dedicated May 2, 2015 Partners: Friends of the Memorial and Library Association, Rhode Island Center for the Book at Rhode Island Council for the Humanities, HarperCollins 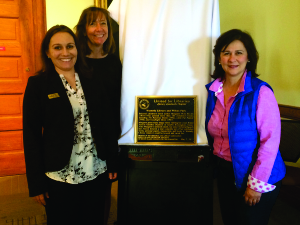 Westerly Public Library was dedicated as a Literary Landmark in honor of Margaret Wise Brown (1910-1952), author of many beloved children's books including Goodnight Moon and The Runaway Bunny. After her untimely death, her sister Roberta Rausch and her friend Jessica Gamble Dunham donated a nearly complete set of her published works, personal papers, and manuscripts to the Westerly Public Library. The dedication included a presentation by Brown's biographer, Leonard S. Marcus, who wrote In Search of Margaret Wise Brown in 1999 and has written a number of books about children's literature and the authors and artists who create them. The Literary Landmark dedication was the first in Rhode Island, and part of Children's Book Week 2015.