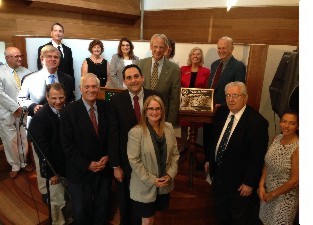 The Walt Whitman Birthplace State Historic Site & Interpretive Center was dedicated a Literary Landmark in honor of the author.

Poet and journalist Walt Whitman was born at the site, and memories of the house and of Long Island strongly influenced his writing. Apprenticed to a printer in his youth, Whitman taught at Long Island schools and founded a weekly newspaper in the area that continues to this day.