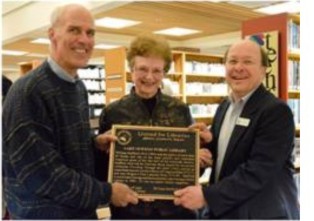 The Lake Oswego Public Library was designated a Literary Landmark in honor of William Stafford as the concluding event of a month-long Lake Oswego Reads program honoring Stafford.

The state of Oregon celebrated the William Stafford Centennial during 2014. He was poet laureate of Oregon 1975-79 and poetry consultant to Library of Congress 1970-71. Between 1960 and 1993, he wrote more than 60 published collections, including 12 full-length books of poems. All but one of his books was written in Oregon. During the 46 years he lived in Lake Oswego he was an ardent supporter of the Lake Oswego Public Library, and he dedicated the present library in 1983. Stafford received the National Book Award for his poetry collection Traveling Through the Dark (1963).

Friends President Terry Huber opened the dedication ceremony with an explanation of the plaque and its importance to the library and community. The event preceded a talk by Louisiana Poet Laureate Ava Leavell Haymon.