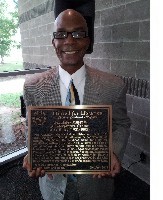 The Alex Haley Museum & Interpretive Center was dedicated a Literary Landmark in honor of the author.

More than 150 people joined the museum staff and board at the ceremo­ny for Alex Haley (1921-1992), as well as to celebrate what would have been Haley’s 93rd birthday. The program included the unveil­ing of the official Literary Landmark bronze plaque; proclamations by city, county, and state officials; the United States Coast Guard and Color Guard Detail; commissioners and Historic Sites Program Director Martha Akins, from the Tennessee Historical Com­mission; music by trumpeter Joshua Campbell, and vocalist Charlotte Am­mons.

“We are so elated to receive this well-deserved honor, and the opportu­nity to share the good news with the world,” said Paula Boger, executive di­rector of the Alex Haley Museum.

Haley’s boyhood home, which was built by his grandfather, William E. Palmer, in 1919, served as a seat of in­spiration for Haley’s Pulitzer Prize- and National Book Award-winning novel Roots: The Saga of an American Fam­ily. Haley’s works, life, and legacy are preserved by the museum.