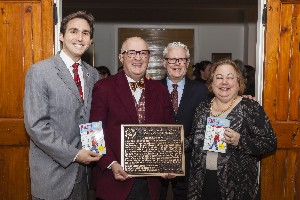 Carl Schurz Park was dedicated as a Literary Landmark in honor of Louise Fitzhugh (1928-1974), who used the park as a setting in her novel for young readers Harriet the Spy.

The dedication was made to commemorate the 50th anniversary of the publication Harriet the Spy. The novel has become a classic that has entertained young readers and inspired future writers. Fitzhugh used this park and other familiar neighborhood sites in her novel. In the park, Harriet follows Ole Golly on her date with Mr. Waldenstein, gathers a frog to put in Marion Hawthorne’s desk at school, and plays a game of tag with the kids in her class. But most importantly, Harriet takes her notebook to the park and sits on a bench, writing under the trees.

Members of the Carl Schurz Park Conservancy board and many children attended a pre-dedication reception at the home of Jerry and Clare Thomas. Copies of the book and audio book were distributed there.

Empire State Center for the Book