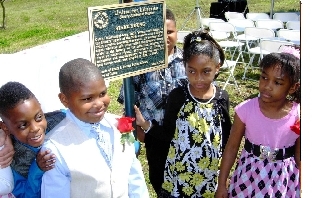 During the Literary Landmark dedication in honor of the author Stark Young, a plaque was placed on the south lawn of the library. The dedication included a performance of “A Visit from Stark Young” by the North Mississippi Storytellers Guild. Karen Wilson, executive director of the Son Edna Foundation in Charleston, gave the keynote about literacy in small-town rural Mississippi. Igor Bosin read selections from Chekhov’s The Cherry Orchard in Russian, with Stark Young’s English translations following. A book signing by Lauren Lavergne’s Como Elementary School first grade class rounded out the tribute’s events immediately prior to the reveal of the Literary Landmark plaque.

In order to provide tools for what library branch manager Alice Pierotti described as “our community doing what we can to create the next Stark Young,” Como Elementary School and the library partnered to hold a series of writing and illustration workshops for first-grade students, who signed their resulting books at the dedication ceremony.

Como, Miss.-born Stark Young was a drama critic, novelist, playwright and poet. An accomplished artist and educator, often called the greatest drama critic in the history of American theatre, his creative ability found expression in fiction, translation and autobiography. So Red the Rose, his best known work, was adapted to film in 1935.

Emily J. Pointer Public Library is a branch of the five-county, 13-branch First Regional Library. “I’m extremely pleased the Como community can come together to get this tribute accomplished,” said First Regional Library Director Catherine Nathan. “The cultural and community leaders in Como are taking a new direction and moving creatively in the 21st century, and I’m thrilled the library can be a part of the next chapter in Como’s history.”