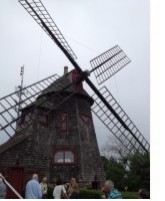 The windmill at the Southampton campus of Stony Brook University of New York was dedicated a Literary Landmark in honor of Pulitzer Prize-winning playwright Tennessee Williams (1911-1983).

The site was selected because playwright Williams spent the summer of 1957 living in the windmill and writing the experimental play “The Day on Which a Man Dies” in response to the death of his friend Jackson Pollock the summer before.

The ceremony was marked with a reading of the one-act play “At Stanley’s Place” by Frederic Tuten, a faculty member in the creative writing and literature program. The Stanley of the title is Stanley Kowalski from the Williams classic “A Streetcar Named Desire.” In addition, faculty member Roger Rosenblatt recalled for the audience Tennessee Williams’ time on the campus. Poet Grace Schulman spoke of Williams’ talent as a poet and concluded with the audience listening to recordings of Williams reading his own poems.  In keeping with the theme, cherry soda, a symbolic element in “A Streetcar Named Desire” was served. Nick Mangano, chair of the school’s Theatre Arts program served as master of ceremonies for the event.

Following the dedication, actress and faculty member Mercedes Ruehl joined others in a group of readings titled “Tennessee: A Portrait, The Writings of Tennessee Williams.”

The windmill was the sixth Literary Landmark for Williams. Other landmarks include his homes in Key West, Fla., and New Orleans.