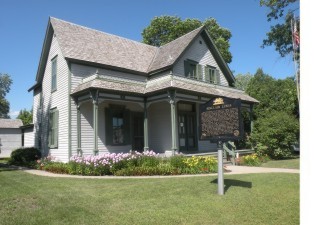 The boyhood home of Sinclair Lewis (1885-1951) in Sauk Centre, Minn. was dedicated a Literary Landmark during  Sauk Centre’s “Sinclair Lewis Days,” an annual, week-long festival celebrating the community and its most famous native son.

Attendees of the dedication included district 12B Rep. Paul Anderson and Sauk Center Mayor Brad Kirckof. Speakers included Minnesota Association of Library Friends President Mary Ann Bernat, who spoke about United for Libraries and the Literary Landmark program; biographer Roberta Olson, who gave a brief sketch of the youth’s years in Sauk Centre; and local author and publisher Dave Simpkins, who is researching Lewis’s diaries for an upcoming volume on the author.

Lewis is buried in Sauk Centre under a modest headstone. Of his many and varied literary achievements, his epitaph lists only “Author of Main Street.” Lewis gained international literary acclaim and immortalized a fictionalized version of the town in 1920’s Main Street.  In 1930, he became the first writer from the United States to be awarded the Nobel Prize in Literature for his vigorous and graphic art of description and his ability to create, with wit and humor, new types of characters.

Lewis’ boyhood one is one mile from the cemetery where he is buried. The home, originally built in 1889, and a National Historic Landmark since 1968, is a major tourist draw and center for Lewis scholarship and symposia. Rather than his later life, career, and death, the Sinclair Lewis Boyhood Home focuses foremost on the Nobel laureate’s early and formative years in Stearns County.