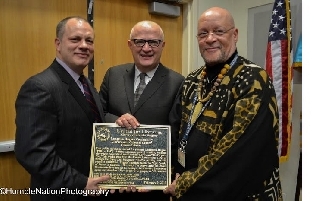 A plaque was placed in the library at 100-01 Northern Boulevard during the 28th annual Langston Hughes Celebration.

Hughes was an African American poet, journalist, essayist, playwright, novelist, and social activist. Hughes wrote more than 860 poems in his lifetime. Although Hughes lived in Harlem, the library was named in his honor in 1969 when it opened for public service. It was the first public institution named for Hughes.

Langston Hughes Community Library is home of the Black Heritage Reference Center of Queens County, housing New York State’s largest public circulating collection of print and non-print material on the black experience.  This collection is estimated at more 45,000 titles, including approximately 1,000 volumes of theses and dissertations on black literature.