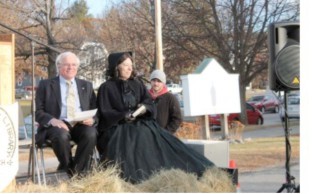 Hale (1788-1879) was a prominent 19th century editor who promoted the education of women and their important role in society. As editor of “Godey’s Lady Book,” she nurtured the careers of Catherine Beecher, Edgar Allan Poe, Nathaniel Hawthorne and Oliver Wendell Holmes. Instrumental in the completion of the Bunker Hill Monument, her many contributions to American culture include a successful campaign to establish Thanksgiving as a national holiday. Hale wrote nearly 50 volumes of work throughout her life, including the nursery rhyme “Mary had a Little Lamb.”