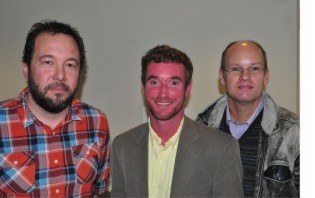 Brown was a frequent patron and strong supporter of the library, establishing the Larry Brown Writers Series that brought a number of authors to the library for public readings and writing workshops. Born in Lafayette County, Brown gave the keynote address at the re-opening of the library after renovations in 1997.

“Books, like people, will probably evolve and change,” Brown said in the speech, “but I don’t worry that they will ever cease to exist. All we have to do as people is keep teaching our children to read, and the rest will more than likely take care of itself. To me, that’s what the library is all about.”

More than 100 people attended the Literary Landmark dedication ceremony, including many members of Brown’s family. Guitarist and singer Clint Jordan, who was a great friend of Brown’s, performed as people were arriving. Speakers included Dr. Jay Watson, who edited the book “Conversations with Larry Brown”; Jonathan Miles, author of “Dear American Airlines” and the new novel “Want Not”; and Shane Brown, Larry’s youngest son, who closed the program by reading an essay about his father from his blog www.thebrowneffect.com. Refreshments included catfish and hushpuppies, along with cookies and milk from Brown Dairy Farm, which is run by Larry’s oldest son, Billy Ray and his wife Paula on the Brown’s property in Yocona.