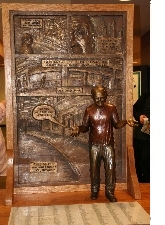 The Cleveland Heights-University Heights Public Library was dedicated a Literary Landmark in honor of Harvey Pekar (1939-2010). Pekar spent countless days at Heights Libraries, working on stories that celebrated his hometown and the common man. Pekar's efforts raised the comic book to a recognized genre.

A crowd of roughly 175 fans, friends, and family of Pekar attended the program “Harvey Pekar: A Literary, Library Life” at the Lee Road branch of Heights Libraries. The event included the unveiling of a Harvey Pekar statue, which was donated to Heights Libraries by Pekar’s widow, Joyce Brabner. The unveiling followed a presentation by JT Waldman, the illustrator who collaborated with Pekar on Pekar’s posthumously published book Not the Israel My Parents Promised Me.

The piece reflects the man it honors. Instead of a life-size depiction of Pekar striking a heroic pose, Brabner and local artist Justin Coulter designed a warm, humble, and interactive sculpture that invites the viewer to consider Pekar’s down-to-earth diligence as well as his creativity: the base of the piece is a real wooden desk, with room for people to sit and draw using supplies in the desk drawer. On top of the desk is a larger-than-life comic book panel rendered in bronze, with Pekar (approximately 2 feet high) stepping out of the bottom of the panel onto the desk.

Waldman’s presentation focused on the professional and personal relationship he had with Pekar, which grew while they worked on the book together. Waldman, who completed the book on his own after Pekar’s death, found the event deeply moving, and a little bittersweet: “When Harvey died I was isolated,” says Waldman, who lives in Philadelphia. “But being here today with all these people who knew him and cared for him and shared the same grief I had felt — it was very comforting. It gave me closure.”

In addition to Waldman and the unveiling, local musician Marissa DeSantis performed an original song, “American Splendor,” that she wrote as a tribute to Pekar and his celebration of everyday life and ordinary people.

The large crowd responded enthusiastically to each presenter, with lots of applause, laughter, and even a few tears. With their daughter Danielle by her side, Brabner spoke movingly of Pekar’s attachment to the library, concluding that theirs was a family  “that always believed a library card was more important than a charge card.”