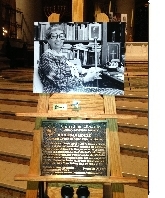 The Cathedral Church of Saint John the Divine  was dedicated a Literary Landmark in honor of Madeleine L’Engle (1918-2007). The author of the children’s literary classic A Wrinkle in Time served as the church’s librarian for more than 40 years.

“It is very appropriate that we dedicate this landmark on November 29 because it would have been L’Engle’s 94th birthday,” said Rocco Staino, director of the Empire State Center for the Book. The sponsors chose the year 2012 for the memorial because it marks the 50th anniversary of the publication of A Wrinkle in Time, for which L’Engle received the prestigious Newbery Medal.

During the dedication Leonard S. Marcus, children’s literature historian and author of Listening for Madeleine: A Portrait of Madeleine L’Engle in Many Voices, spoke about L’Engle and her connection to the cathedral. Among the others who spoke at the ceremony were Charlotte Jones Voiklis, L’Engle’s granddaughter and literary executor; Robin Adelson, executive director, Children’s Book Council; the Very Reverend Dr. James A. Kowalski, dean, Cathedral Church of Saint John the Divine; Beth Nawalinski, director of marketing & communications, United for Libraries; Simon Boughton, senior vice president and publisher, Farrar Straus Giroux Books for Young Readers, an imprint of Macmillan Children’s Publishing Group, and Rocco Staino, director of the Empire State Center for the Book. In attendance were Lena Roy and Edward Jones, L’Engle’s grandchildren.

The Cathedral Church of Saint John the Divine