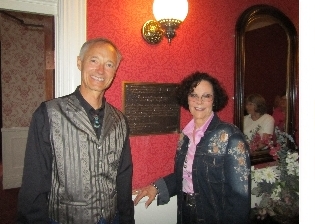 Room 222 of the Strater Hotel was dedicated a Literary Landmark in honor of Western author Louis L'Amour (1908-1988). In addition to many other visits, for more than 10 years L'Amour, and often his family, spent the month of August in the hotel. He worked in a room directly above the Diamond Belle Saloon, where he said the sounds inspired him to write. A former bellman at the hotel, Rod Barker, recalls that L'Amour traveled with a trunk full of books that required two bellman to lift and carry up a flight of stairs to room 222.

The Literary Landmark dedication took place at 2 p.m. Guests at the dedication included Paula Wiseman and Wayne Bedor of the Friends of the Durango Public Library. L'Amour's widow, Kathy L'Amour, unveiled the plaque along with Strater co-owner and CEO Rod Barker. Following the dedication was the Strater Hotel's 125th birthday community party from 5 to 8 p.m. The party included live music by Blue Moon Ramblers and Wild Country, along with food, prizes, and a birthday toast at 7 p.m.

L'Amour left school in the 10th grade, but throughout his life he spent time in libraries and bookstores across the world. He won the Western Writers of America's Golden Spur Award, and in 1983 Congress awarded him the National Gold Medal, followed by the Medal of Freedom a year later. His books have been translated into more than 15 languages, and by 2000, 12 years after his death, more than 60 million copies of his books had been sold.