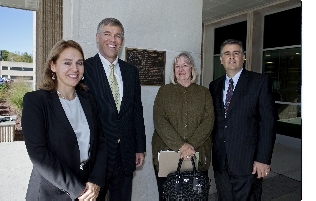 The Elihu Burritt Library at Central Connecticut State University was dedicated a Literary Landmark  in honor of Elihu Burritt (1810-1879).

Burritt was an international peace advocate, abolitionist, writer, lecturer, and consular agent to Birmingham, England, appointed by President Abraham Lincoln. Born to a family of 10, he had to look for work at an early age after his father died and the family business was not producing enough income for the family. He became a linguist who started learning foreign languages while apprenticing at a local forge and this practice as well as his public speeches earned him the nickname of the “Learned Blacksmith.” His writings are housed at the Central Connecticut State University (CCSU) Library and in the New Britain Public Library. The CCSU collection contains extensive correspondence, personal notes, lectures, photos and his published works as well as publication about him.

University administrators, faculty, and students were in attendance at the dedication on Thursday, Oct. 11. The Skinner, Cargill, and Bradley families sponsored the Literary Landmark and established an endowed scholarship, announced at the dedication. The Elihu Burritt Family Scholarship Fund  will benefit a CCSU undergraduate matriculated student in good standing, with GPA 3.0 or better, who is engaged in an academic assignment which will require use of the Burritt library resources, and in particular the Elihu Burritt Collection.