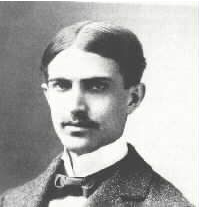 Stephen Crane was born in Newark, NJ on November 1st, 1871 as the fourteenth child in his family. After his brother gave him a chance to write for a local newspaper, Crane moved to New York in 1892 to establish himself as a freelance journalist.

Shortly after a trip to Mexico, Crane received the opportunity to hitch a ride with an illegal gun-running ship headed toward Cuba. Crane planned to write some articles on the country. However, the Commodore sank in the Caribbean Sea, not far from its starting point in Jacksonville, FL.

The press reported that Crane and all the members of the ship died in the accident, however, Crane and three other men from the ship survived in a dinghy for thirty-six hours before washing upon the shore of Daytona Beach, FL. A couple from the town offered Crane a place to sleep in their home, Lillian Place. It was here that Crane was inspired to write “The Open Boat”, a recollection of his near-death experience at sea.

On May 11, 1990, the Friends of the Volusia County Library Center honored Stephen Crane by designating Lillian Place as a Literary Landmark. Crane died on June 5, 1900 at the age of 29.