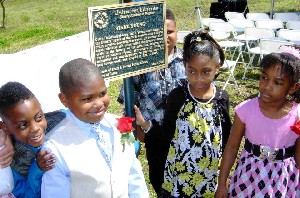 The Literary Landmarks Association was founded in 1986 by former FOLUSA president Frederick G. Ruffner to encourage the dedication of historic literary sites. The first dedication was at Slip F18 in Bahia Mar, Florida, the anchorage of the Busted Flush, the houseboat home of novelist John D. MacDonald's protagonist Travis McGee.

In 1989, the Literary Landmark project became an official FOLUSA committee. Literary Landmarks™ continues with United for Libraries, the division of ALA created by the joining of FOLUSA and ALTA.

Dedications have included homes of famous writers (Tennessee Williams, Marjorie Kinnan Rawlings, William Faulkner), libraries and museum collections, literary scenes (such as John's Grill in San Francisco, immortalized by Dashiell Hammett, and Willa Cather's Prairie near Red Cloud, Nebraska), and even "Grip" the Raven, formerly the pet of Charles Dickens and inspiration to Edgar Allan Poe and now presiding (stuffed) at the Rare Books Department of the Free Library of Philadelphia. The list of dedicated sites continues to grow.

United for Libraries is dedicated to creating a diverse and inclusive community in the Division and to advocating for Friends, Foundations and Trustee boards to reflect the diverse communities they serve in an effort to promote full engagement and participation. This core commitment permeates the work of the Division, cutting across all United for Libraries committees, interest and discussion groups, and communities of practice. United for Libraries will continue to acknowledge and address racial inequities; value different ways of knowing; and identify and work to eliminate barriers to equitable services, spaces, and resources.

Questions/concerns about a Literary Landmark? Contact United for Libraries.

Literary Landmarks™ is a trademark of United for Libraries.