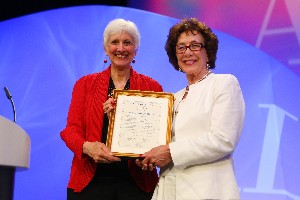 Originally appointed to the St. Tammany Parish (La.) Library board in 1999, Dr. Argiro Morgan has continuously served the library since then. As library board president since 2006, she has had a major impact on the library’s accomplishments. She has led a steady transformation to help the library meet the technological revolution, ensuring that the library recovered from the devastation of Hurricane Katrina and that a new, state-of-the-art library was opened in Madisonville after the storm. In 2008, Governor Bobby Jindal appointed Morgan to the Louisiana State Library Commission, of which she now serves as president. In 2011, she began revitalizing the St. Tammany Parish Library Foundation, a project that won a United for Libraries’ Baker & Taylor Award in 2013.