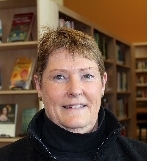 Dot Lindsey, a member of the Board of Trustees of the Rangeview Library District (Thornton, Colo.), is the winner of the 2013 United for Libraries/Gale Trustee Conference Grant.

Lindsey was appointed to the Rangeview Library District Board of Trustees in 2004, after retiring from decades of teaching mathematics to junior and senior high school students. She served as co-chair of a successful 2006 mill levy campaign that provided the funding necessary to support the transformation and revolution of the library district.

Lindsey is serving her second five-year appointment with the board.  In addition, Lindsey was a member of a panel that presented “The Board’s Role in Revolutionizing Library Services” at the 2010 Colorado Association of Libraries Annual Conference. She also attended the 2012 PLA Conference and the 2012 R-Squared Conference.