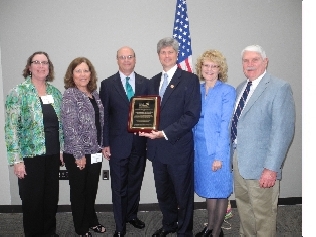 Rep. Fortenberry was the first Congressman willing to speak up about the importance of the issue of compelling libraries to test for lead in all children’s books. He recognized that a legislative fix that reasonably dealt with the issue was needed.

Rep Fortenberry was also honored for his openness to constituents, often meeting with his local librarians when they attend National Library Legislative Day each year.

Rep. Fortenberry was elected to the United States House of Representatives in 2004. He is a member of the House Appropriations Committee and previously served on the House Foreign Affairs Committee, where he placed particular focus on human rights concerns, Middle Eastern affairs and nuclear weapons non-proliferation. Prior to serving in Congress, Representative Fortenberry worked as a publishing industry executive in Lincoln, where he also served on the Lincoln City Council.