As part of National Friends of Libraries Week, the Friends of Phil­lipsburg Free Library held a “Friends and Family Day” open house on Sun., Oct. 21. The goal of the event was to “promote the Friends and our mission of supporting the library to patrons and to the community, to excite the public about the library’s services and programs beyond books, and to in­crease the number of people reached to supplement our annual membership drive.” Although the library is normally closed on Sundays, the library director and staff opened the doors to accom­modate the event. Special invitations were mailed to the library’s Board of Trustees, sponsors, and supporters. Sponsors promote the week’s events by displaying posters and invitations at their businesses. The event was pro­moted via press releases, the Friends newsletter, and flyers. Additional events during the week included a public proclama­tion of Friends of Libraries Week by the mayor, a program with the New Jersey Ghost Hunters Society, an iPad overview session, a talk by local au­thor Janet Stafford, and a self-defense demonstration. A summary of events can be found in the group’s YouTube video. 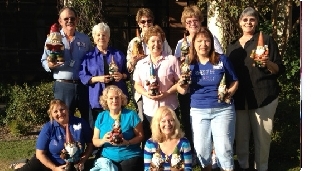 The Friends of the Mansfield Pub­lic Library began the celebration of National Friends of Libraries Week by kicking off a year-long membership drive with a “gnomination campaign.” Current Friends members “gnomi­nated” people in the community for membership by sharing ceramic garden gnomes that had attached instructions for becoming a Friend, or “gnomie homie,” as they were called during this campaign. “Gnominees” included members of the Library Advisory Board, the Early Childhood PTA, city staff, His­toric Downtown Mansfield Associa­tion members, the editor of the local newspaper, school board members, and many friends and neighbors of current members. To get the public involved, “gno­minees” and renewing members were encouraged to snap their pictures with the gnomes and post them on their Facebook page, as well as on the Friends Facebook page after they had joined the Friends. “Gnomie Homies” began popping up everywhere. Traf­fic on the Friends Facebook page increased 300% after two days and 487% by the end of the week. The Friends display in the library included “little gnome facts” about the Friends posted on the shelving ends, and standing gnome cutouts so patrons could snap their photos and join in the library. The library display case in­cluded gnomes and books that were about gnomes. The group also created and posted a brand new QR code that allowed patrons to link directly to the Friends website with their mobile phones to join. The QR codes were also inserted into the Friends bro­chure that was available on the display table. The Friends website included “Gnomination” information, as did the library website on the city of Man­sfield webpage. An email blast was sent to Friends members encouraging them to pick up a gnome and “gnomi­nate” their friends and neighbors. The Friends president wrote a letter to the editor that was published in the local paper and the paper did a feature story on the “gnomination” campaign. At the end of the week, member­ship had increased by almost 50%, and memberships were still coming in after three weeks. The group plans to con­tinue this campaign throughout 2013 and use it during the year with several new projects.