In 2012, the Friends of the L.E. Phillips Memorial Public Library held its busiest Give-A-Kid-A-Book project ever. In its 18th year, the Give-A-Kid-A-Book project was implemented to make sure that every underprivileged child in the Chippewa Valley would receive a new book during the holiday season. In 2012, the Friends distributed 4,771 books to 16 community agencies.

The Friends of the L.E. Phillips Memorial Public Library begin planning for the Give-A-Kid-A-Book project in late September to early October. Organizational meetings are held in early October to determine volunteer needs as well as shopping, sorting, and distribution dates. Community agencies are contacted at this time regarding the number of books they will need this holiday season. Agencies can indicate the number of books they need in each of the following categories: infant to age 2 (board books), ages 2-5 (picture books), lower elementary grades (fiction), upper elementary grades (fiction), elementary grades (nonfiction), middle/high school (fiction), middle/high school (nonfiction) and minority. The Friends also have a spot for special requests, which can include anything from audio books to books highlighting special needs or particular social skills. Local schools and community businesses are also contacted at this time to see if they would be willing to hold book drives for the project. In 2012, the Friends received support from the following local businesses/organizations:

The Give-A-Kid-A-Book project relies heavily on donations from the community as well as volunteers. Every year the library puts up an evergreen tree in the front lobby so that library patrons and community members can bring in donated books and leave them under the tree. In 2012, the Friends received 1,570 donated books in this manner. In addition to leaving books under the tree, community members also leave monetary donations. The Friends also send out a mailer to its members asking for donations. In 2012, the Friends received more than $3,000 in donations for the project. The Give-A-Kid-A-Book project is unique in that it unites Friends members, library patrons, and members of the community in one goal: to make sure that every underprivileged child receives a book during the holiday season.

In 2012, the Friends had 80 volunteers donate more than 200 hours of their time. At the end of every season the Friends send out individual thank-you notes and put an ad in the local newspaper thanking both donors and volunteers.

The Friends try to promote the Give-A-Kid-A-Book project as much as possible. A press release is sent out in early November advertising the project, and large posters and donation forms are set out at each of the participating local businesses/organizations that are collecting books. In addition, the Friends have donation forms available at the reference and information desk at the library. In 2012 the Friends appeared on WEAU to promote the program. Articles describing the program were featured in the local newspaper, in both the “Around Town” and the “Main Events” sections. Articles detailing the project were included in Library Links, the Friends of the Library’s quarterly newsletter. The Friends also included information about the project and volunteering needs on the group’s website.

St. Tammany Parish is located north of Lake Ponchartrain, with New Orleans on the south shore. In 2003, with significant growth in the parish, community members established the St. Tammany Library Foundation to support efforts to build and renovate libraries in the parish. The Madisonville Library would become a primary focus, as it would be newly constructed and have modern amenities.

In 2005, after hurricanes Katrina and Rita, the population of the parish increased by 35%. The sudden influx strained every aspect of the parish’s infrastructure. With severe economic challenges in the region, funding for state libraries decreased, and the St. Tammany Library Foundation fell into disarray. In addition, the funds for the Madisonville Library were cut by $1 million. Consequently, project leaders decided to decrease the library’s amenities.

In 2012, committed supporters resurrected the St. Tammany Library Foundation, knowing that the library would need funding from multiple public and private sources. The new Foundation initiated efforts to ensure that the library would have state-of-the-art amenities and would meet the needs of the expanded population. The Foundation established goals of establishing a working board, identifying funding sources, launching a public awareness campaign, launching a member campaign, and launching a first project.

All goals were met. A new nine-member board was appointed, and an advisory group was established. Donations were secured from Slidell Memorial Hospital and from local law firms. A PowerPoint presentation was created to use for public education, and the community was invited to the Foundation’s first meeting in January, where the press, public officials, civic leaders, and residents came to learn about the Foundation’s goals and needs. Six socials were held in strategic areas of the parish to facilitate interest in the new Foundation and recruit charter members. These socials (lunches or cocktail gatherings) were hosed by supporters in their homes at their expense. Charter member recruitment culminated with an exclusive dinner at a local restaurant featuring a keynote speech by Louisiana Lieutenant Governor John Dardenne. The first project, a patio and garden at the library dedicated to Walker Percy, kicked off with the board engaging architects to complete plans eliminated from the original architectural design because of funding. The Foundation began selling pavers to fund the project.

In 2012, the new Foundation recruited 75 charter members and raised $9,700, developing significant community involvement and initiating the momentum to become a viable support to the library system.

Friends of the Atascadero (Calif.) Library 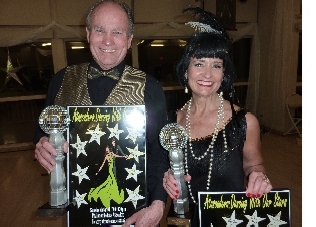 In 2012, the Friends of the Atascadero Library was in the second year of their “Open the Doors” campaign, a capital campaign to open a new library in Atascadero in partnership with the county of San Luis Obispo. The Atascadero community’s obligation was to provide a total of $2 million by the end of 2012. Almost half of the amount had been raised over many years of used booksales and individual giving, even before the formal campaign was initiated. Of the total obligation, the Friends need to raise another $300,000 in 2012, a challenging goal in a small community in difficult economic times. The Friends needed to maintain the campaign’s momentum and attract new donors.

The exceptional fundraising results for “Dancing with Our Stars” are due to the concept. IN addition to performing at the event, the competing dancers convince others to buy votes with library donations. In order to win, they must solicit the most votes from friends, family, employers, and the organizations with which they are connected.

Because the available venue in town is small, the Friends also developed a strategy called “pre-event voting.” Votes purchased beforehand cost $5, instead of $10 on the night of the event. The fundraiser could not succeed without the dancers, few of whom had any prior experience dancing on stage.

Planning began several months in advance, focusing initially on recruiting the local celeberties who would be both the entertainment and the primary means of outreach before and during the event. The goal was to select individuals who were well-known in town, willing to learn and perform a dance, and enthusiastic about asking their friends and colleagues to support them. The 2012 “stars” included the county supervisor, a city council member, the chamber of commerece board chairperson, a city fire captain, a local minister, a professor from Cal Poly, a public school principal, local business owners, and two exchange students and their hosts – a diverse group of dancers who could provide support from different segments of the community.

The chamber of commerce board member brought in an extra $2,000 by encouraging local business owners to vote for her. A grateful client of a local retail shop owner donated $5,000 in votes. One dancer received a $5,000 corporate donation from his employer, a large utility company that had not yet contributed to the campaign. The principal asked the parents at his school to donate to the teen center the new library would offer. Local church member supported their minister, and local service groups, like Kiwanis, raised funds for their dancers.

Volunteer dance instructors donated their time to train the “stars,” including a local couple who teach ballroom dance. A dance instructor on the Friends planning committee coordinated the program and helped recruit three other volunteer instructors, who choreographed and taught students, performing with them if needed. Most of the “stars” performed traditional ballroom dances, but the program also included a tap duo and a group number. The participation of dance professionals ensured theatrical, entertaining, and high-quality performances.

By December 2011, the Friends announced the “stars” to the local media and began publicity. Dancers were given decorative jars to use for donations, as well as postcards to distribute to friends and family. The Friends’ website coordinator added an online voting option, so people could vote online in addition to voting at the library or sending donations to a PO box. Tickets went on sale in early January for $65 and sold out in a few hours.

At the event, 250 attendees were served wine and heavy appetizers before the program began. A volunteer disc jockey provided music for the performances and throughout the evening. Those attending were provided with ballot envelopes where they could mark their choice(s) and pay for their votes. Awards were given for three places, based on total votes received. A separate award was given to the dancer that received the most votes that night. The event netted $70,000 for the library campaign, a 20% increase over the previous year. Because of the many volunteer efforts, expenses were only 9.5% of revenue.