This event will be presented free and livestreamed on Facebook. All United Virtual registrants will receive a Zoom link. 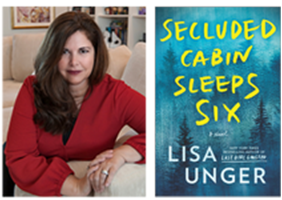 Lisa Unger (Secluded Cabin Sleeps Six, Harlequin) is a NYT and internationally bestselling author. In 2019, she received two Edgar Award nominations, an honor held by only a few writers including Agatha Christie. Her work has been named on "Best Book" lists from Today, People, GMA, EW, Amazon, IndieBound and many others. She has written for the New York Times, Wall Street Journal, NPR, and Travel+Leisure.

"What could be more restful, more restorative, than a weekend getaway with family and friends? An isolated luxury cabin in the woods, complete with spectacular views, hot tub, personal chef. Hannah’s loving and generous tech mogul brother found the listing online. The reviews are stellar. It’s his birthday gift to Hannah, including their spouses and another couple. The six friends need this trip with good food, good company, and lots of R&R, far from the chatter and pressures of modern life.

But the dreamy weekend is about to turn into a nightmare. A deadly storm is brewing. The rental host seems just a little too present. The personal chef reveals that their beautiful house has a spine-tingling history. And the friends have their own complicated past, with secrets that run blood deep. How well does Hannah know her brother, her own husband? Can she trust her best friend? And who is the new boyfriend, crashing their party? Meanwhile, someone is determined to ruin the weekend, looking to exact a payback for deeds long buried. But who is the stranger among them?

In this explosive and original thriller, master of suspense Lisa Unger delivers a juicy roller coaster ride about the secrets and lies between family and friends, and the worst vacation ever." From Edelweiss+ 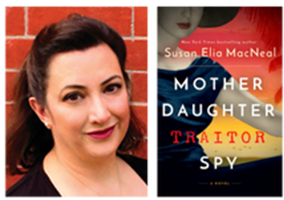 "June 1940. France has fallen to the Nazis, and Britain may be next—but to many Americans, the war is something happening “over there.” Veronica Grace has just graduated from college; she and her mother, Violet, are looking for a fresh start in sunny Los Angeles. After a blunder cost her a prestigious career opportunity in New York, Veronica is relieved to take a typing job in L.A.—only to realize that she’s working for one of the area’s most vicious propagandists.

Overnight, Veronica is exposed to the dark underbelly of her new home, where German Nazis are recruiting Americans for their devastating campaign. After the FBI dismisses the Graces’ concerns, Veronica and Violet decide to call on an old friend, who introduces them to L.A.’s anti-Nazi spymaster.

At once, the women go undercover to gather enough information about the California Reich to take to the authorities. But as the news of Pearl Harbor ripples through the United States, and President Roosevelt declares war, the Grace women realize that the plots they’re investigating are far more sinister than they feared—and even a single misstep could cost them everything.

Inspired by the real mother-daughter spy duo who foiled Nazi plots in Los Angeles during WWII, Mother Daughter Traitor Spy is a powerful portrait of family, duty, and deception that raises timeless questions about America—and what it means to have courage in the face of terror." From Penguin Random House 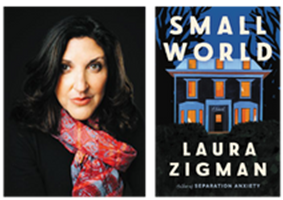 Laura Zigman (Small World, HarperCollins) is the author of Separation Anxiety, Animal Husbandry, Dating Big Bird, Piece of Work and Her. She has been a contributor to the New York Times, the Washington Post, and the Huffington Post. She lives in Cambridge.

"A year after her divorce, Joyce is settling into being single again. She likes her job archiving family photos and videos, and she’s developed a secret comforting hobby: trolling the neighborhood social networking site, Small World, for posts that help solve life’s easiest problems. When her older sister, Lydia, also divorced, calls to tell her she’s moving back east from Los Angeles after almost thirty years away, Joyce invites Lydia to move into her Cambridge apartment. Temporarily. Just until she finds a place of her own.

But their unlikely cohabitation—not helped by annoying new neighbors upstairs—turns out to be the post-divorce rebound relationship Joyce hadn’t planned on. Instead of forging the bond she always dreamed of having with Lydia, their relationship frays. And they rarely discuss the loss of their sister, Eleanor, who was significantly disabled and died when she was only ten years old. When new revelations from their family’s history come to light, will those secrets further split them apart, or course correct their connection for the future?

Written with wry humor and keen sensitivity, Small World is a powerful novel of sisterhood and hope—a reminder that sometimes you have to look back in order to move ahead." From Edelweiss+ 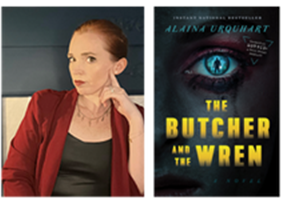 Alaina Urquhart (The Butcher and the Wren, Ingram) is the science-loving co-host of the chart-topping show Morbid: A True Crime Podcast. As an autopsy technician by trade, she offers a unique perspective from deep inside the morgue. Before writing her first psychological horror novel, she received degrees in criminal justice, psychology, and biology. When she isn’t hosting Morbid, she hosts the Parcast original show Crime Countdown, and a horror movie podcast called Scream! Alaina hails from Boston, where she lives with her wonderful husband, John, their three amazing daughters, and a ghost puggle named Bailey.

"Something dark is lurking in the Louisiana bayou: a methodical killer with a penchant for medical experimentation is hard at work completing his most harrowing crime yet, taunting the authorities who desperately try to catch up. But forensic pathologist Dr. Wren Muller is the best there is. Armed with an encyclopedic knowledge of historical crimes, and years of experience working in the Medical Examiner’s office, she’s never encountered a case she couldn’t solve. Until now. Case after case is piling up on Wren’s examination table, and soon she is sucked into an all-consuming cat-and-mouse chase with a brutal murderer getting more brazen by the day. An addictive read with straight-from-the-morgue details only an autopsy technician could provide, The Butcher and the Wren promises to ensnare all who enter." From Zando Projects 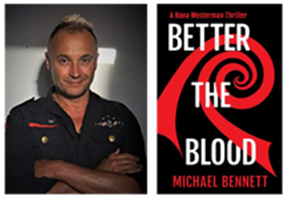 Michael Bennett (Ngāti Pikiao, Ngāti Whakaue) (Better the Blood, Ingram) is an award-winning screenwriter, director, and author whose films have been selections at major festivals, including Cannes, Berlin, Toronto, and New York. His nonfiction book, In Dark Places, which explored an infamous miscarriage of justice, won awards, and his young adult graphic novel, Helen and the Go-Go Ninjas, was a finalist for the 2019 New Zealand Book Awards.

"A tenacious Māori detective, Hana Westerman juggles single motherhood, endemic prejudice, and the pressures of her career in Auckland CIB. Led to a crime scene by a mysterious video, she discovers a man ritualistically hanging in a secret room and a puzzling inward-curving inscription. Delving into the investigation after a second, apparently unrelated, death, she uncovers a chilling connection to an historic crime: 160 years before, during the brutal and bloody British colonization of New Zealand, a troop of colonial soldiers unjustly executed a Māori Chief.

Hana realizes that the murders are utu—the Māori tradition of rebalancing for the crime committed eight generations ago. There were six soldiers in the British troop, and since descendants of two of the soldiers have been killed, four more potential murders remain. Hana is thus hunting New Zealand’s first serial killer.

The pursuit soon becomes frighteningly personal, recalling the painful event, two decades before, when Hana, then a new cop, was part of a police team sent to end by force a land rights occupation by indigenous peoples on the same ancestral mountain where the Chief was killed, calling once more into question her loyalty to her roots. Worse still, a genealogical link to the British soldiers brings the case terrifyingly close to Hana’s own family. Twisty and thought-provoking, Better the Blood is the debut of a remarkable new talent in crime fiction." From Grove Atlantic