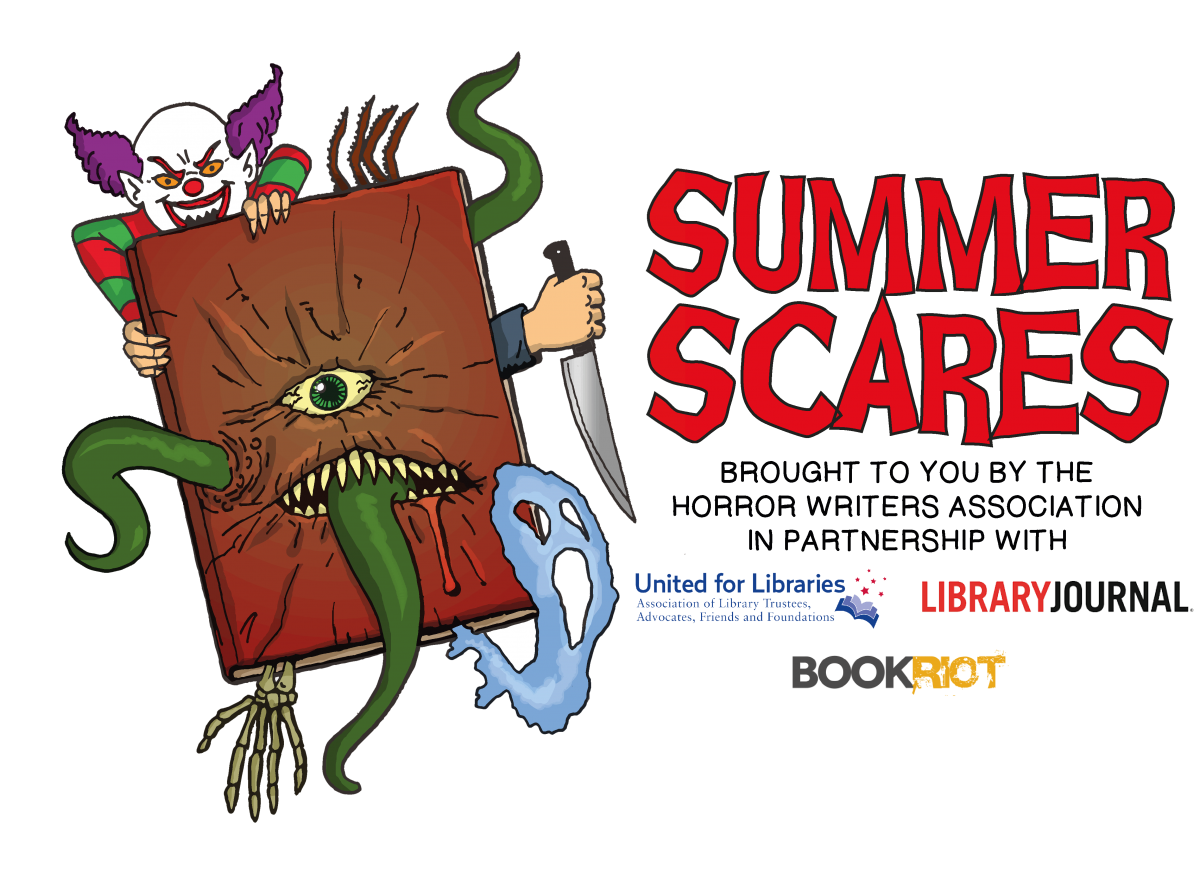 The Horror Writers Association (HWA), in partnership with United for Libraries, Book Riot, and Library Journal/School Library Journal, is developing Summer Scares—a reading program that will provide libraries and schools with a list of recommended horror titles to include in summer reading.

The committee, which includes Award-winning author Grady Hendrix (We Sold Our Souls), will be selecting three recommended fiction titles in each of three reading levels— Middle Grade, Teen, and Adult— for a total of nine yearly Summer Scares selections. Official Summer Scares designated authors will also be making themselves available to appear, either virtually or in person, at public and school libraries all over the country, for free.

Becky Spratford, author of The Readers’ Advisory Guide to Horror, is secretary of the Horror Writers’ Association and Summer Scares program coordinator. She’s also a library consultant, and she reviews horror for Booklist. Becky is also a trustee member of United for Libraries.

United for Libraries: What exactly inspired the idea for the Summer Scares program?

Spratford: Author Grady Hendrix, JG Faherty, and I were all on a panel together at StokerCon [a popular annual horror-based convention] in March. The topic of discussion was, “How do we introduce the horror genre to a broader audience?” There are a lot of people out there interested, but having trouble finding titles. And we came up with an idea to suggest a list of titles that were vetted by us, the Horror Writers Association. We wanted [the list] to say, “Hey, we’re experts, and these are good books—here’s a place to start.”

The idea was to launch it in conjunction with StokerCon—since the next one is in May, we thought it would be a good idea to put it in with Summer Reading.

United for Libraries: What are some of the criteria the Summer Scares committee looks for in a book that leads it to becoming a potential recommendation?

Spratford: We’re looking for, quite honestly, books with authors who are willing to participate—that’s half the program. We want, at the very least, for the authors to be available to make a virtual appearance. This isn’t just about how good the book is. The program is more about connecting books with potential readers and giving people a chance to interact with horror authors, especially the younger readers. to be able to interact with the author behind [the story] just makes reading come alive for them. So we really are looking for that interaction between the authors, the libraries, and their patrons.

We’re making sure that all of the books we’re considering are age-appropriate and critically acclaimed, but widely available, so that they’re easily accessible to libraries. To ensure that the list is inclusive and diverse, we are requiring that at least 50% of the titles are written by female authors, and that at least 30% are “own voice” titles.

Even if an author’s book isn’t chosen, we are going to give them a chance under the Horror Writers’ Association to go visit the libraries, the schools, and talk about the titles that were chosen. They’ll get a chance to promote themselves, too, in the process.

The entire program is about promoting horror—the entire genre—as a great reading option for all ages.

United for Libraries: How would you define the horror genre and what type of positive effects has it had on youth and peers around you?

Spratford: Horror is an emotional genre; similar to romance, it’s about how the book makes you feel. It uses speculative elements—things that are not real and cannot be—to create that sense of fear. Readers go into it expecting to get that emotional reaction.

The stories are very character-driven. It’s a genre about characters overcoming terrible obstacles, and coming out victorious. That’s why both adults and kids are drawn to horror: you have these underdog heroes who have to fight something that is way worse than anything that the reader would ever have to face in real life. In horror, you can empathize with the main character, and it offers that “You can do it!” message that we can all relate to. There’s so much to learn from a genre like that.

It’s also a form of escapism: In times of turmoil, you’ll see a resurgence of popularity surrounding the horror genre. It was the highest-grossing horror movie last year. It’s a huge-selling genre. People are searching for these books.

United for Libraries: How has the horror genre impacted you?

Spratford: I was always drawn to things that were slightly darker, more interesting. I loved reading Shel Silverstein poetry as a kid.

I grew up white, middle-class, educated—I saw horror as a way to get to know struggle, something that I hadn’t ever really experienced myself. It gave me a glance at the other side of things.

United for Libraries: How were the Summer Scares committee members chosen?

Spratford: I asked myself, Who do I know that knows horror?  I’ve worked with Grady Hendrix before, so I contacted him, and he wanted to be part of it. By getting involved, he is eliminating himself as an author who can be on the list, but that’s fine, because his books are held by many libraries—he’s pretty well-known. We asked him to be our celebrity spokesperson.

I immediately thought of Kelly Jensen of BookRiot, who is a YA Horror expert. I reached out to Kiera Parrott, reviews director for Library Journal, who was more than happy to help. I really wanted an academic librarian to be part of it, too, so I reached out to library director and Prairie State College dean Carolyn Ciesla, who is very well-versed in horror for all age levels. I think we have a well-balanced group of people from backgrounds associated with horror and librarianship.

United for Libraries: In addition to implementing programs like Summer Scares, what would you say is your main focus as a trustee?

Spratford: I’ve been a trustee for going on 17 years; I’ve been an ALA member for over 18 years and a United for Libraries member for at least 7 years. People come to me knowing I’m the library expert in my community.

I’ve been involved in a lot of boots-on-the-ground activity and advocating for libraries. I live in a community where the library is well-received, and we happen to have a healthy budget. But we’re still constantly working to remind communities of just how important the library is.

I really like the United for Libraries programs that connect authors with libraries specifically, and I try to take advantage of that as much as possible—finding the right programming and getting authors into the libraries. People come to me at restaurants, in line at stores, and give feedback on the things I’ve been involved in at the libraries: Renovations, new buildings, and upcoming changes. I can see the impact that it has in my community.

The committee’s final selections will be announced on February 14, 2019—National Library Lover’s Day. Selected authors of those titles will appear on a panel to kick off Summer Scares during StokerCon 2019 on May 10 in Grand Rapids, Michigan.