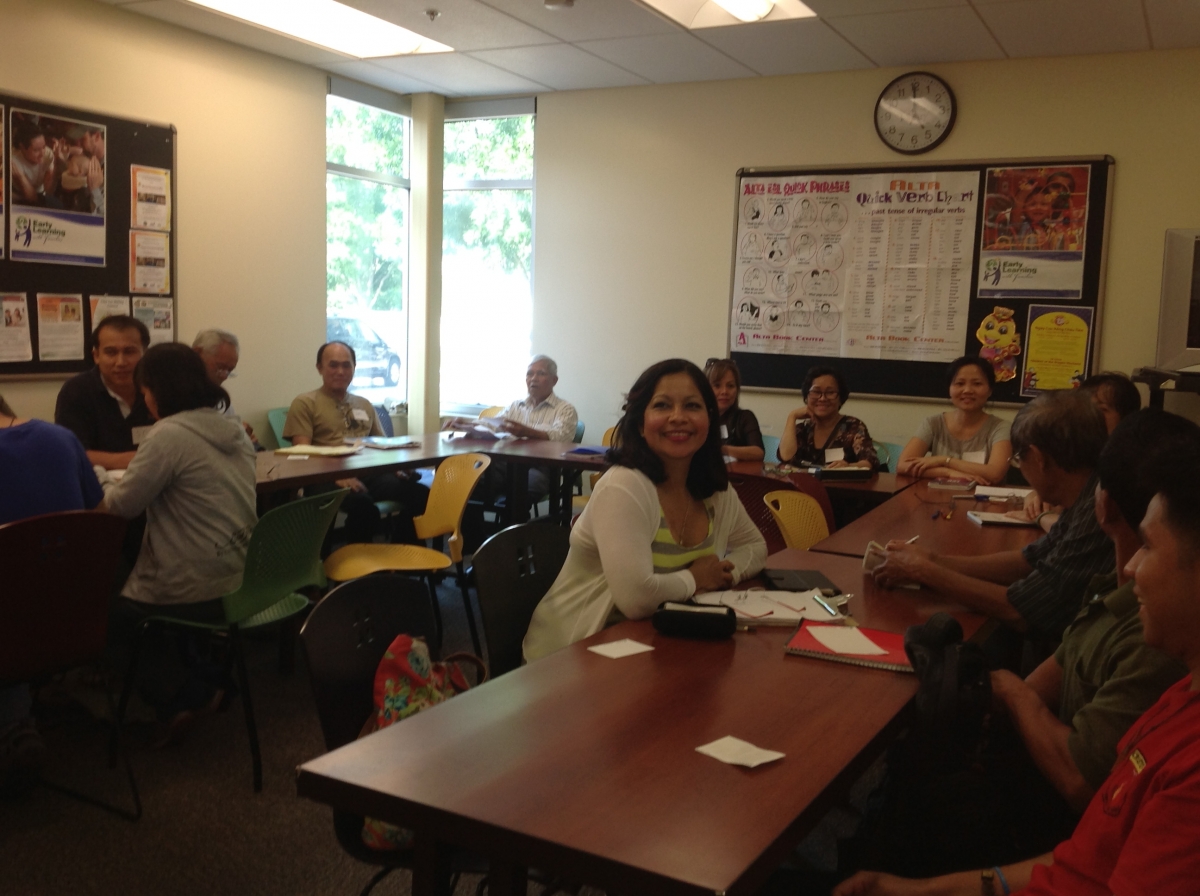 As one of the libraries in the Libraries Transforming Communities Public Innovators Cohort, we have begun a series of community conversations aimed at gaining a better understanding of the community served by the Seven Trees Branch Library. Ultimately, our goal is to use Harwood tools to make a difference for all Seven Trees residents. However, considering the value of these tools, we decided to extend our Harwood practice and host a conversation with a specific community served by the library: recent immigrants.

San Jose is home to large immigrant populations from Mexico, Vietnam, China, India, Eastern Europe and the Middle East. The San Jose Public Library serves these populations through seven Family Learning Centers (FLCs), centers that provide information, resources and programs for residents who want to learn or improve their English skills and/or become U.S. citizens. In order to improve our FLC services, we want a better understanding of immigrant communities. What better way to gain that understanding than a community conversation with our FLC users?

We weren’t sure if this was the best approach for our FLC conversation. Our FLCs are primarily focused on educational issues: adults and families learning English and adults preparing to take the citizenship exam. We were concerned that if our approach was open-ended, the information we gathered might not be relevant to that mission. We asked ourselves: should we let the focus of the community conversation be determined by the participants, or should we as the conversation leaders narrow the focus?

We planned to start with the two open-ended questions that begin any Harwood community conversation:

Then we would turn to educational concerns with question 3:

Education would then remain the conversation topic for questions 4-10:

Next we had to decide on a time and place. Our other community conversations for Seven Trees residents were planned several weeks or months in advance, and we are inviting participants through flyers, notifying partners and talking to patrons in the library. For our FLC community conversation, this process wasn’t necessary. We already had groups of FLC users meeting regularly in the library for ESL classes; all we had to do was arrange a Community Conversation during a class. We selected a class at the Tully Community Branch Library (which has a very active FLC) and communicated with the instructor to confirm the date. The class we selected had about 20 students ranging in age from early 20s to 60s. Most were Vietnamese, with four or five Hispanic students. There were about the same number of men and women.

During the conversation itself, we started out with the open-ended questions, and many of the students were willing to participate. The students expressed a variety of aspirations (a cleaner community, a safer community, etc.), but two seemed most important to them: a healthy community and a community without discrimination and prejudice.

With question 3, we shifted the conversation to educational concerns. At this point, the students became much less willing to participate. We’re not sure why. We suspect that the students had difficulty understanding the questions or perhaps had less to say on the topic. It’s also possible that they were uncomfortable speaking in English (though we encouraged participants to speak in their native language if they wanted to) or were reluctant to speak in general. (Chieu told me that many of the students resist speaking during ESL classes as well).

Still, a few students were willing to talk about education. Learning English was their major concern — not surprising since these were students in an ESL class — and the reason, they said, was a desire for better employment opportunities. One of the participants described his situation like this (I am paraphrasing): “I need to go to school to learn English so I can be more successful. I need to work to support my family. Because I need to work, I can’t go to school to learn English.”

As the gentleman said this, many of the other participants nodded their heads in sympathetic agreement. The participants appeared to feel stuck in a vicious cycle that prevents them from learning the skills they need to find better jobs. Unfortunately, we ran out of time before we could talk about solutions to this problem.

Participants also said they wanted to learn English to improve communication in their family — for example, parents and grandparents talking to children who are not fluent in the family’s native language — and also to improve communication between individuals from different cultures and ethnicities. One participant wished for more opportunities for vocational training. Another participant talked about the problem of going to school to get certified for a certain type of job and then discovering, after getting certified, that there are very few jobs available in the field.

We learned a great deal from this experience. As we plan FLC community conversations in the future, it may be beneficial to have separate gatherings for Vietnamese and Spanish speakers, rather than attempt a conversation with all ESL students at once. Participants would probably have a better understanding of the questions and be more likely to contribute. This would also allow us to schedule the conversation to meet for an hour and a half. The ESL class met for an hour, which we found was not enough time.

For future FLC community conversations, we also wonder if it might not be better to use the standard community conversation questions and let participant ideas determine the focus of the conversation. Our participants responded more strongly to the first two, open-ended questions; when we switched the conversation to focus on education, the conversation faltered. If we decide we want to continue to focus on education, we may need to spend more time considering how best to phrase those questions. Participants seemed to have a difficult time talking about their “educational concerns,” how educational issues affect them personally, or how they relate to the success of their families. Perhaps if we came up with some simpler, more direct ways to phrase the questions, they would be more likely to respond.