Articles and Television Reports About the Edward Said Public Library

“Libraries in Gaza: Between Despair and Hope,”
with Mosab Abu Toha 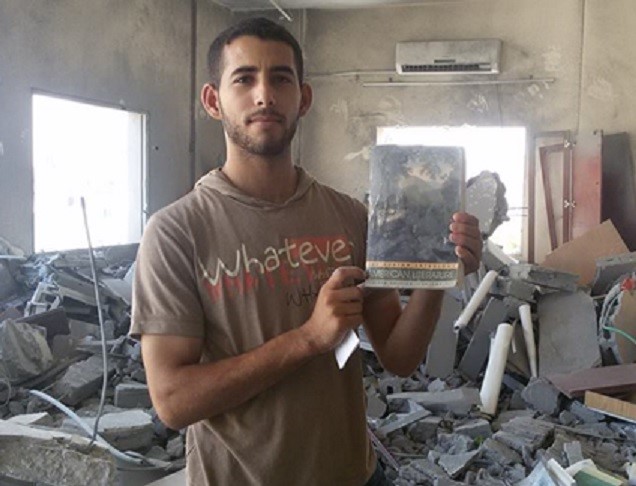 Mosab Abu Toha in the English Department at the Islamic University of Gaza, August 2014.
Photo by Adham Al-Ashqar.

Titles suggested by Mosab Abu Toha for the SRRT website.

Pollitt, Katha. “Most of Gaza’s Libraries Have Been Closed or Destroyed—and You Can Help a New One Get Off the Ground,” The Nation, Apr. 11, 2017.

“Gaza: The Opening of the First Library Specialized in Western Literature in the Southern Governorates,” Palestine TV (Ramallah, Palestine), Sept. 5, 2017.

“A University Student in the Gaza Strip, Accompanied by a Group of His Volunteer Colleagues, Inaugurated the First Free Public Library for English Books and Literature,” Al Jazeera (Qatar), Mar. 22, 2017.

This discussion group was devoted to various efforts to help Palestinian libraries. Speakers for "Assisting Palestinian Libraries" were:

See the report in the SRRT Newsletter for a description of the program and PowerPoint presentation.

Cosponsored by Libraries and Archivists with Palestine (LAP) and SRRT, June 26, 2016

Resources for the program

“SRRT: Palestinian Libraries: Resources: ” Audio recording with PowerPoint slides of presentations by Palestinian librarians Randa Kamal and Diana Sayej Naser at the ALA annual conference in 2016.

Articles on the program

Eberhart, George M. “Academic Libraries in Palestine: Challenges and Frustrations of Information Access in the Palestinian Territories,” American Libraries, June 27, 2016. Article about Randa Kamal and Diana Sayej Naser with Youtube recording of their interview at the ALA annual conference in 2016.

Cosponsored by Libraries and Archivists with Palestine (LAP) and SRRT

“The Current Situation in the Occupied Territories and in Palestinian Libraries.” The program was chaired by Stephen Stillwell. Speakers were Professor Cheryl A. Rubenberg at Florida International University and Dr. Majed Khader of the Marshall University Library. Organized by the SRRT Task Force on Israeli Censorship.

Fasheh, Mary. “The International Board on Books for Young People in Palestine,” Progressive Librarian, Issue #48, Spring 2021.

Hamad, Abla. “Testimony of al Ataa Librarian: Is it My Fault That I Am a Palestinian? Days of Horror” IBBY Palestine, Oct. 2014.

IBBY Palestine, “Passionate Drawings 2015: Drawings by the Children of PBBY Libraries in Gaza,” 2015.

Kanaan, Lara, “Private Libraries in Nablus Have a Bright Past and an Uncertain Future,” Progressive Librarian, Issue #48, Spring 2021.

Librarians and Archivists with Palestine, Report Back Handout, Jul. 4, 2013.

Natarajan, Vani and Hannah Mermelstein, “Knowledge, Access, and Resistance: A Conversation on Librarians and Archivists to Palestine,” Informed Agitation: Library and Information Skills in Social Justice Movements and Beyond (Library Juice Press, 2014).

Matloub [Wanted: Library Books for Palestine], Sponsored by Librarians and Archivists with Palestine (LAP) and the Tamer Institute for Community Education. “Matloub (Wanted) seeks to raise awareness about issues facing libraries in Palestine and the political context in which they operate, while at the same time offering material support for the libraries' collections.”

The Palestinian Section of IBBY (the International Board on Books for Young People)--PBBY, “PBBY's different activities address the children's right to books and education. Thus PBBY supports literacy and children culture, and encourages reading and the promotion of quality of books in Palestine.” For more information about this organization, see the IBBY Palestine website.

*For the history of the 2019-2020 resolutions defending the free speech rights of the movement for Palestinian rights, see Tara Brady’s “Councilor's Report from ALA Annual Conference 2019,” SRRT Newsletter, Issue #208, Oct. 2019; SRRT Action Council, “Response to the Report of the Resolution Review Task Force,” Jan. 17, 2020; and the IRTF report, “Successes and Disappointment at ALA Midwinter,” April 2020.