IRTF Report: Successes and Disappointment at ALA Midwinter

For the International Responsibilities Round Table, the 2020 Midwinter Meeting combined successes with disappointment.

We want to highlight our successful resolution on freedom of speech and assembly at ALA meetings (2019-2020 ALA CD#40). The need for this action resulted from the way an ad hoc demonstration against CIA recruitment was treated at the 2019 ALA Annual Conference in Washington, DC. ALA staff had summarily stopped a peaceful non-obstructive demonstration in front of the CIA booth in the exhibit hall. SRRT’s resolution was actually broadened on the Council floor and passed by unanimous vote. It requires that ALA Council approve all internal restrictions to First Amendment rights proposed by all ALA offices, ALA committees, or other ALA bodies.

On Jan. 25, Mosab Abu Toha, the founder and director of the Edward Said Public Library in Gaza, spoke movingly on the topic “Libraries in Gaza: Between Despair and Hope.” Approximately 30 people attended—a respectable turnout for a Midwinter discussion group—and many signed up to receive more information. Mosab recounted the heartbreaking destruction of his English Department library at the Islamic University in Gaza by Israeli bombs, and how that moved him to create the Edward Said Public Library. He also described the variety of other difficulties faced by librarians in Gaza and all Gazans. A recording is available of a similar presentation by Mosab, introduced by Noam Chomsky, at the University of Arizona on Feb. 10. Donations supporting the Edward Said Public Library can be made through the Middle East Children’s Alliance. 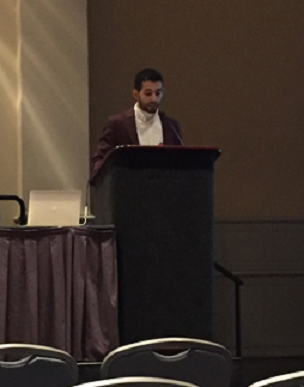 In contrast, the outcome of our resolution was disappointing. At the 2019 ALA annual conference SRRT Action Council, motivated by ALA’s strong historical commitment to the defense of free speech and intellectual freedom in general,1 passed a resolution opposing the massive wave of legislation restricting the free speech of supporters of Palestinian rights. Subsequently, it was approved by the ALA membership meeting by a vote of 63 to 62. Then ALA Council referred it to a task force ultimately composed of representatives of the Committee on Legislation (COL), the International Relations Committee (IRC), the Intellectual Freedom Committee (IFC), SRRT Action Council, and one other Councilor.

Preceding the task force discussions, one task force member falsely charged that the resolution was motivated by anti-Semitism on the part of SRRT’s International Responsibilities Task Force. (Similar accusations and insinuations were expressed in other ALA discussions of the resolution.)  However, following a sharp SRRT condemnation of the accusation as unacceptable and inappropriate, the member apologized for the personal attack, and discussion in the task force proceeded without incident.

A sense of the ensuing discussion can be gathered from the task force’s “Report/forwarding letter” and SRRT Action Council’s “Response to the Report,” reproduced in this issue.

On December 20 the task force submitted a revised resolution, also published here, to each of the represented groups. SRRT Action Council endorsed it prior to the Midwinter Meeting. Appropriately, at Midwinter the IRC concluded that a resolution on domestic free speech was outside of its scope. However, COL voted not to support the resolution. In its discussion and in a position paper developed with ALA’s Public Policy and Advocacy Office, COL insisted the resolution was “not related to libraries.” This was despite the fact that in many states this legislation compels library vendors and contractors to sign non-boycott oaths,2 and information professionals who are independent contractors will be forced to do the same. COL further objected that the resolution would be a diversion from the focus of ALA’s legislative agenda—though it was simply a statement of opposition to restrictive legislation. Oddly, although the restrictive legislation has significant bipartisan support, COL insisted ALA must “remain non-partisan.” Even more oddly, COL members continued to argue that opposing these restrictive bills would  “box us in” if they were amended. This was despite the fact that the revised resolution explicitly opposed only existing versions of bills and versions that would continue to infringe upon free speech. Most troubling was COL’s insistence that “while resolutions of this sort have been supported by Council in the past, the political situation has changed,” signaling a fundamental break with ALA traditions.

Although we hoped IFC and the Office for Intellectual Freedom (OIF) would demonstrate a greater commitment to intellectual freedom and free speech, we were again disappointed. Most vehement was the Director of OIF, who expressed alarm at the possibility of a Council discussion of the resolution. However, her biggest objection, repeated by IFC members, was that the resolution would divert resources from OIF’s work on other issues. We had difficulty seeing how our simple statement of opposition to restrictive legislation would do that. In her draft talking points she also insisted that boycotts can impair academic freedom, and that any resolution should plainly say ALA takes no position on divestment, sanctions, or BDS—ignoring the fact that the revised resolution explicitly stated that ALA currently takes no position on BDS. Most curiously, she also insisted that “ALA is not a civil liberties organization,” despite numerous statements to the contrary on the ALA website and OIF’s own web pages, including statements by past ALA and OIF leaders.3

Consideration of the resolution in Council was anti-climactic. Since none of the three committees on the task force supported the task force’s revised resolution, discussion reverted to the original resolution. While SRRT members preferred the revised version, we were persuaded by ALA parliamentarian Eli Mina that substituting it would be extremely complicated, time consuming, and  frustrating. Considering the opposition we faced, we concluded it would not be productive. Ultimately, the original resolution was defeated overwhelmingly.

3 See, for example, Barbara Jones, “The Office for Intellectual Freedom at the American Library Association,” https://www.ifla.org/files/assets/faife/publications/newsletter/august-2013.pdf; ALA President Barbara Stripling, “Will You Stand for Privacy?,” American Libraries, July 11, 2013, https://americanlibrariesmagazine.org/blogs/the-scoop/will-you-stand-for-privacy/; Nancy Kranich, “Choose Privacy Week 2014,” May 5, 2014, https://www.oif.ala.org/oif/?p=4968; Keith Michael Fiels, “Report to Council and Executive Board,” June 20, 2013, http://www.ala.org/aboutala/sites/ala.org.aboutala/files/content/governance/officers/eb_documents/2012_2013ebdocuments/ebd12_34_exec_directors_rpt_ac13.pdf; Adam Eisgrau “Almost, but not too late to tell @SpeakerRyan to #StopCISA,” December 16, 2015, https://www.oif.ala.org/oif/?p=5879; ALA News, “ALA joins others to demand civil liberties,” Fri, 06/14/2013, http://www.ala.org/news/press-releases/2013/06/ala-joins-others-demand-c... “Minutes, ALA Executive Board Meeting,” June 24-28, 2016 2016, p.13, http://www.ala.org/aboutala/sites/ala.org.aboutala/files/content/governance/officers/eb_documents/2016_2017ebdocuments/ebd2_1_minutes_ac16.pdf.