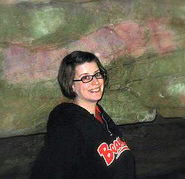 I asked Nanette Donohue to allow us to profile her for this issue of Footnotes. She will be the president of NMRT beginning this summer and has many ideas for new and exciting ventures for NMRT. Of her candidacy for vice-president/president-elect, she said, "I wasn't expecting to run for NMRT president when I did. I knew I was going to do it, but I thought I would wait until my term as director was over. Someone nominated me, though, and after I thought about it for a while, I decided to go for it. I like being involved with the organizations that I belong to. I can't just pay my dues and sit back and wait for the monthly magazine to show up. I believe strongly in the mission and goals of NMRT, and anything I can do to help further the organization is good for all new ALA members. I'm very proud of what we've accomplished as an organization over the last several years, and I'm excited to see where things go in the future."

She went on to say, "I've met a lot of great people through my time on the NMRT board, and I've had some wonderful times at conference. I know the next three conferences are going to be super-hectic and tiring, but a lot of fun. I've got some exciting ideas for my presidential year, and I've got some fantastic committee chairs lined up. I'm really looking forward to Annual!"

She began her library career early with a job through a local high school job-training program. She worked in automation and helped bring her local public library's collection online on a CLSI system. "It's amazing how much automation and online searching have changed since the late 1980s and early 1990s," she said. She went on to work in the circulation department during her undergraduate education at Millikin University. She had a friend who applied at the library because she didn't like her cafeteria job, so she decided to apply as well. She was interviewed for the job "because I had library experience," and thought, "why not?" For a job she didn't particularly want, she must have ended up liking it because she stayed there for three and a half years.

When asked about her career path, Nanette responded, "I didn't go into librarianship right after college for one major reason: my mom is a librarian. Since I started my first job, everyone assumed that I would be a librarian just like my mother, and I was at that age where I didn't want to be 'just like my mother.' I ended up going into teaching and spent one year teaching middle school English on the south side of Chicago. Oddly enough, my dad started out as a middle school English teacher and switched careers, so it turned out that I was trying to be just like my dad!" After teaching, Nanette moved into the publishing field before coming back to librarianship.

She currently works at the Champaign Public Library as technical services manager. She feels lucky to have found this position just a few months after graduation from library school and said, "It was exactly what I wanted to do, and the search committee saw something in me that they liked and decided to hire me. I work with a great group of people, and I've learned a lot here."

Nanette became chair of a committee when the current chair couldn't finish her term in 2003, which is what happened to another NMRT president, Beth Kraemer. So take note that stepping up to the plate when there is something you see that needs to be done can demonstrate your leadership abilities.

Beyond NMRT, Nanette is involved in PLA, ALCTS, and LAMA. She is on the ALA Membership Committee and serves as assistant editor of the ALCTS Newsletter Online.

She is also involved in her state library association, which does "a lot of great grassroots advocacy work and really get things done very effectively." She currently chairs the Illinois Library Association's Resources and Technical Services Forum and serves on the ILA Membership Committee. Her advice is, "If you haven't joined your state or regional library association, you should!"

Outside of work, Nanette is very interested in fiber arts, particularly knitting and weaving. She just took a weaving class and says it was a lot of fun. She also wants to learn how to spin on a wheel. As with her professional involvement, she has joined organizations such as the spinners and weavers guild. She also likes to read, which she states is "not uncommon among librarians!"

Her professional and personal lives intertwine as her husband, Tim, is also a librarian and co-chair of the NMRT Web Committee. They have two cats, Pepper and Lily, who "keep us very busy with their feline antics."

When you meet up with Nanette at Annual, ask her about Jeopardy. She was a three-time winner and won money to pay for her degree as well as a trip to Hawaii!