Brought to you by the Membership Promotion and Relations Committee

Tanzi Merritt, Director of Library and Information Services at Gateway Community and Technical College, married Jay Sutton on May 30, 2005 in Las Vegas.

Tanzi Merritt Sutton was promoted to Director of Library and Information Services at Gateway Community and Technical College effective July 1, 2005.

Tanzi Merritt Sutton was appointed to the ALA Council Committee on Legislation for 2005-2007.

Catherine Collins, NMRT Treasurer-Elect, gave birth to her second child on February 25, 2005 in Philadelphia, Pennsylvania. Peter Collins Grauke weighed 8 lbs. and was 21 inches long. He joins big sister Eleanor who is a frequent attendee of ALA and NMRT events. 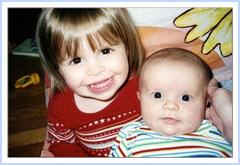 Send Headliners submissions for the next issue of Footnotes to AmyGF76@fastmail.fm.