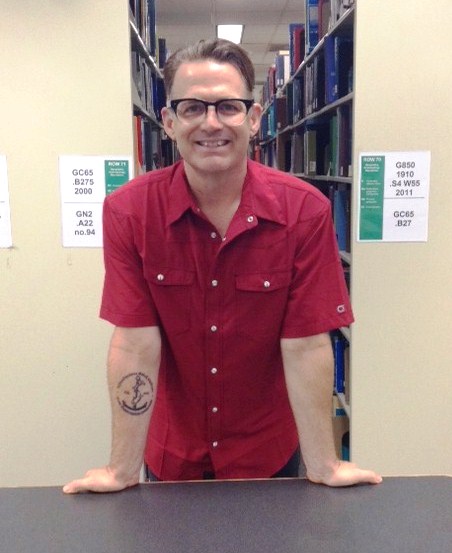 Hi. This is the first post to the new Library History Round Table's (LHRT) blog, LHRT News. My name is Doug Campbell, the LHRT News Editor. I envision this to be a site to share information about people, events, and other relevant items related to the history of libraries and librarians. For the first post, I wanted to share a little bit about myself and how I "got into" library history.

Why do I love library history? I love libraries, that’s why. This is the first post of the new Library History Round Table’s blog, LHRT News, and I am proud to be it’s first editor. In the first post, I decided to take the opportunity to introduce myself and share a little bit of my interest in the history of libraries. Looking back at my childhood through my undergraduate college years, I am an unlikely candidate to be an editor of a blog about libraries and their history, not to mention be a member of LHRT and the American Library Association. I can count on the fingers of one hand the number of times I visited the public library in my small home town of Van Alstyne, Texas. I can count on the fingers of my other hand the number of times that I walked through the doors of the academic library at Stephen F. Austin State University in Nacogdoches, Texas, the oldest town in the Lone Star State. Except for comic books given to me by my grandmother, I wasn’t a big reader from adolescence through graduate school. It was not until graduate school, seminary actually, that the seed of interest in libraries and the services they provide was planted in me.

I entered Golden Gate Baptist Theological Seminary in Mill Valley, California in 1994 with intentions to prepare to become an overseas missionary. A year later, I began working in the seminary’s library as a part-time circulation clerk. A year and half after that, through a series of fortuitous events, I was promoted to circulation supervisor, soon thereafter becoming the acting reference librarian, although I didn’t have a library degree. I worked in the seminary’s library for three years until I finished my master of divinity. While working in the library, the seminary librarians saw promise and potential in me as a professional librarian, encouraging me to consider library school. Although I enjoyed working in the library, I still had not given up on the idea of the ministry.

In 2000, I moved to Waco, Texas, and began working in the library at McLennan Community College, staying there for two years. It was in Waco that I decided to take the leap (of faith?) and attend library school. Again, the librarians encouraged me to consider a career in libraries and earn a master of library science. I visited the University of North Texas (UNT) to look into their library school. I met with Herman Totten who asked me why I wanted to become a librarian. I told him that enjoyed helping people find information. He said that was the perfect answer because too many librarians entered the profession because they like to read. It was then that I realized that librarianship is not unlike ministry in that they are both dedicated to serving others. I decided to go from a man of The Book to a man of all books, so to speak. I moved to Denton, Texas and began the MLS program at UNT in 2002, graduating in 2004.

It was in library school that I was introduced to ALA. I always had an interest in history, so I naturally began to look into the history of libraries. A LIS faculty member, Elizabeth Figa, told me about the LHRT and I began to dig around its web page. I enjoyed looking through the library history bibliographies, and began reading some of the articles and books listed. I discovered that studying library history was "a thing," and that people actually did research in this area. I thought that was pretty cool. I began to discover and research figures and ideas in US library history such as William Ladd Ropes, librarian at Andover Theological Seminary from 1866-1905; Jennie Maas Flexner, librarian at the New York Public Library from 1929-1944; and economist, Alvin Saunders Johnson, economist and author of the A Report to Carnegie Corporation of New York on the Policy of Donations to Free Public Libraries  (1915) and The Public Library, A People’s University (1938). I also enjoy researching the history of the Library Bill of Rights, censorship in public libraries, and libraries as places.

My first involvement with LHRT was attending the ALA Midwinter meeting in Boston in 2010. I attended some lectures at the 2010 Annual Conference in D.C. that summer. I have attended the LHRT meetings and events in Anaheim (2012), Chicago (2013), and Las Vegas (2014), and the 2013 Midwinter meetings in Seattle. I have enjoyed getting to know library history researchers and fellow enthusiasts at these meetings and virtually. I am looking forward to meeting more of you and doing whatever I can to help spread the good news, dare I say gospel, of library history. Library history is an interesting history. It is as much, if not more so, about people than it is about the sharing of books and information. It is certain the story of the connection between people and information, and in between these two are librarians, a diverse and interesting group of people, of which I am proud to be a part.