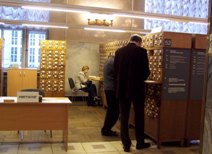 In early 2005 I was invited to participate in a People to People Ambassador study visit to Russia. It was to be a delegation of Texas librarians and the group included public, academic and school librarians. We had a terrific itinerary with a tour guide who was very knowledgeable in Russian history, literature, and politics. After arriving from New York through Frankfurt, we stayed four days each in Moscow and St. Petersburg, visiting libraries as well as other points of interest. The libraries were very welcoming and included a large national childrens’ institute, a scientific library, the state library, and the department of library science at the university in St. Petersburg.