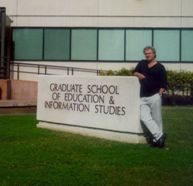 You challenged us to give an account of a study visit – as for me, I have been involved with not one visit but two. These were highlights of my life in 1989 and, ten years after, in 1999: I managed to go to the United States on a Soros Scholarship and a Fulbright Scholarship, respectively. I even celebrated my 40th and 50th birthdays in the US!

English – or Anglo-American, to set a tone for librarianship early on - has been a special streak in my genealogy. As an English major, I graduated 1976 with a degree of excellence from Eötvös University Budapest. (My LIS diploma too, a couple years later, was earned from the same institution.) My English professor was kind enough to warn me not to expect a grant from the state until the communist system existed, so I never bothered to apply. Enter George Soros, the American millionaire of Hungarian descent, who, on the eve of the shift of regime, set up an independent grants system which gave me a grant in the US – on a dual research of American studies and Library and Information Studies. My first ever stay in the US came after I had worked more than a decade for the Serials Department of the Academy Library Budapest.

My application for a grant preceded a visit to Hungary in 1986 by Sarah Fine, Professor of LIS at Pitt. I was her interpreter during her stay in Budapest. She insisted I submit a research proposal to be pursued at Pitt, and, as a sure sign of quake-like changes to come, I did get the grant from the Soros Foundation, so in January 1989 I flew to the US the first time in my life. For an American studies scholar as well as a librarian the experience – nay, submersion - was nothing short of sensational. I was absolutely amazed by the warm reception in Pittsburgh, even the provost turned up at the welcome party at SLIS; I was given a room in the department and was invited to most faculty meetings. I attended a variety of classes by Carla Hayden, Blanche Woolls, Toni Carbo, Elen Detlefsen, E.J.Josey  and others. I gave lectures to the Pitt community on the sea-changes that were going on in Hungary in the truly miraculous spring of 1989. I visited and lectured at Texas Women’s University in Denton, Stanford, and UCLA.

My second American adventure, a Fulbright grant at UCLA and at the American-Hungarian Foundation, took place in 1999. But what about the ten years in between? Well, upon my return Hungary in 1989 I was soon appointed head of computing:  Armed with the massive knowledge I had mastered overseas, I did my best to disseminate the best practices of the trade: I was in charge of the first ever ILS (Aleph-300) in my institution, headed the retroconversion projects, consolidated the OPAC as well as launched the web-presence of the Library of the Hungarian Academy of Sciences.

And in the middle of the 1990s, there was, again, a visit to Hungary: by Professor Christine Borgman, who had come as a Fulbrighter herself. The close professional relationship resulted in an invitation to UCLA and a successful application at the Fulbright Commission. In 1999, I could participate in a wealth  of programs at the Grad School of Information Studies, attend classes of Anne J. Gilliland, Greg Leazer, Jonathan Furner and others, and gave lectures. There was a second part of my Fulbright grant: I worked for four months at the American-Hungarian Foundation, New Brunswick, NJ.,  in charge of its library, mainly feeding in the records of the holdings - now it is a sublibrary of Rutgers online.

My overseas studies were once again a rich source of experience for years to come: upon my return to Hungary in late1999 I continued in charge of library automation, sharing my experiences in the everyday workings of the library, in speeches at conferences as well as in writing professional articles. I finished my PhD studies in LIS, yet, alas, my dissertation on digital libraries is still in progress or, simply stated, overdue.

To sum up my twin tour: in 1989, I had the opportunity to sample the environment of an American campus. The lasting impression of this was the existence of a community which was dynamic as well as real and virtual at the same time.  In 1999, I returned to enjoy the same athmosphere and could pick up so much in terms of professional knowledge that this fodder was enough for years to come. Personally, I must mention the circumstance that I was accompanied to LA by my daughter, Anna Banhegyi, a graduate of American studies from Eötvös University Budapest. She was allowed to audit classes and this meant for her that now, eight years later, she is a doctoral student at SMU in Dallas and, having finished her PhD studies, she is preparing her dissertation on the history of the American West.

What did these study tours mean for me? I do hope I could communicate the advances in library and information science and help my country’s  library scene in adopting those. I still entertain the role of communicator, from and to English: for this latter let me refer to the fact that I am a chief contibutor to an English language publication, the Hungarian Library and Information Abstracts (HLISA), which regularly supplies scholarly material on the status of our trade in Hungary. And, who knows, I might pay again a study visit to the US – 2009 is drawing near.