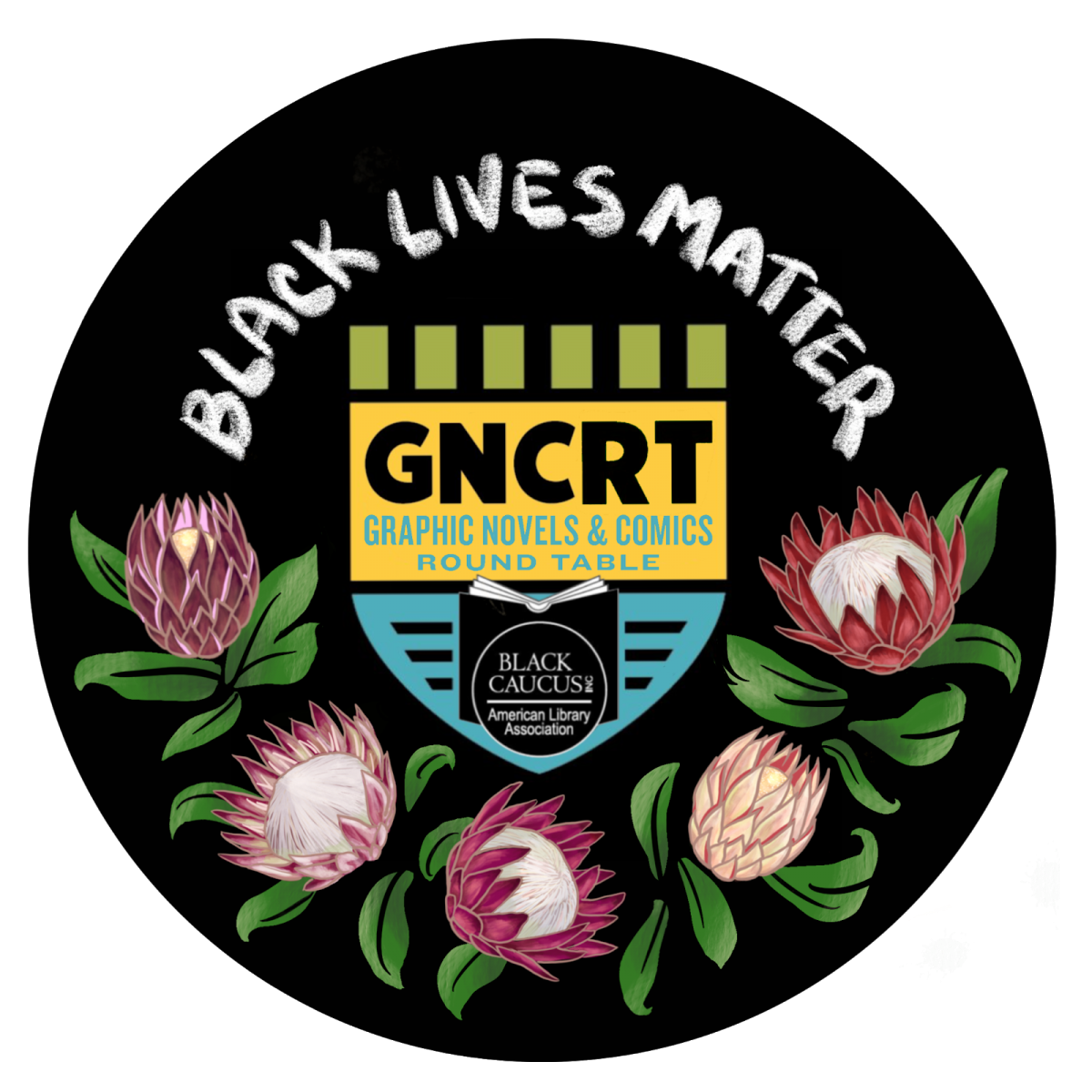 As the next iteration of our ongoing collaboration between the Black Caucus of the American Library Association (BCALA), and the Graphic Novels & Comics Round Table of the American Library Association (GNCRT), we are launching an updated version of our Black Lives Matter comics reading list with a focus on Black Literature. Black Lives Matter, Black Literature Matters.

This list of 50 comics titles for Juvenile, Teen (YA), and Adult audiences is centered on Black creators, Black stories, and Black histories for all ages. This list includes many titles from our earlier comics list, while adding others. The goal of this list is not to be a prescriptive spectrum of all the subject or format content out there in the landscape of Black stories or comics. Rather, this is a step, another step, towards building collections and conversations that spark hope, demand justice, address erasure, and agitate for learning - using both sides of our brains through words and pictures. Because when ‘Black lives are lost, Black stories are lost’ (Stacey Robinson).

Title must be published sequential art, with one of more of the following elements:

*Not all elements listed above are required for inclusion; to date, all titles included are in English

NOW AVAILABLE AS A PRINTABLE PDF!

The Adventures of Sparrowboy
Brian Pinkney
1997, Aladdin [Simon & Schuster]
A paperboy discovers he has superpowers like his hero Falconman. Ages 0-8.
Worldcat

Black Heroes of the Wild West: Featuring Stagecoach Mary, Bass Reeves, and Bob Lemmons
James Otis Smith, writer and artist; Kadir Nelson, introduction
September 2020, TOON Graphics
This nonfiction graphic novel brings to life the tales of three African American historical figures who made an impact on the Western expansion of the United States, known for their success in stage coach driving, as a US marshal, and in horsemanship. Ages 8-12.
Worldcat

The Crossover (Graphic Novel)
Kwame Alexander, writer; Dawud Anyabwile, artist
2019, Houghton Mifflin Harcourt
Adapted from the Newbery award-winning novel in verse, this coming-of-age story features twins brothers, and their relationships to each other, to their father, and to basketball. Ages 9-12.
Worldcat

Shortcut
Donald Crews
1992, HarperCollins
A group of children encounter a freight train after taking a shortcut on the tracks. Ages 0-8.
Worldcat

Tales of the Talented Tenth: No. 2, Bessie Stringfield
Joel Christian Gill
2016, Fulcrum Publishing
Imagine a five-foot-two-inch-tall woman riding a Harley eight times across the continental United States. Now imagine she is black and is journeying across the country in the pre-Civil Rights era of the 1930s and '40s. Ages 9-12.
Worldcat

When the Beat Was Born: DJ Kool Herc and the Creation of Hip Hop
Laban Carrick Hill, writer; Theodore Taylor III, artist
2013, Roaring Brook Press [Macmillan]
Introduces the beginnings of hip hop in the 1970s and 1980s through the biography of DJ Kool Herc, starting on the island of Jamaica and moving to the Bronx, NYC. Ages 6-10.
Worldcat

Woke Baby
Mahogany Browne, writer; Theodore Taylor, illustrator
2018, Roaring Brook Press
Woke babies are up early. Woke babies raise their fists in the air. Woke babies cry out for justice. Woke babies grow up to change the world. This lyrical and empowering book is both a celebration of what it means to be a baby and what it means to be woke. With bright, playf inul art, Woke Baby is an anthem of hope in a world where the only limit to a skyscraper is more blue. Ages 0-8.
Worldcat

Aya: Life in Yop City
Marguerite Abouet, writer; Clement Oubrerie, artist; Helge Dascher, translator
2012, Drawn and Quarterly
Aya and her friends navigate the paths of womanhood available to them as young adults in the Ivory Coast during the late 1970s. Collects volumes 1-3.
Worldcat

Black History in Its Own Words
Ronald Wimberly
2017, Image Comics
Black history, as told through quotes from the Black men and women who shaped and made it.
Worldcat

Black Panther & The Crew: We are the Streets
Ta-Nehisi Coates, Yona Harvey, and Jackson Butch Guice
2017, Marvel Worldwide, Inc.
The death of a Harlem activist kicks off a mystery that will reveal surprising new secrets about the Marvel Universe's past - and set the stage for a huge story in the near future!... Fear, hate and violence loom, but don't worry, The Crew's got this: They are the streets.
Worldcat

Colorblind: A Story of Racism
Johnathan Harris, writer; Donald Hudson, artist; Fahriza Kamaputra, colorist
“Colorblind – Johnathan’s story of multiculturalism – is a gripping story of a 15-year-old boy who had his civil rights violated by police officers in Long Beach, California. Jonathan’s uncle, who was in prison at the time, teaches the young boy how to deal with racism by seeing the world through a multicultural lens rather than the color of people’s skin.  In the end, the two bestow upon each other the most valuable gift of all: freedom.” - from publisher
Worldcat

Colored: The Unsung Life of Claudette Colvin
Émilie Plateau
2019, Europe Comics
A biography of Claudette Colvin, who was arrested at the age of 15 when she refused to give up her seat on a segregated bus in Montgomery, Alabama, a short time before Rosa Parks.
Worldcat

I Am Alfonso Jones
Tony Medina, writer; Stacey Robinson and John Jennings, artists
2017, Tu Books
Alfonso Jones, a young black teen, is only trying to buy a suit when an off-duty cop mistakes a clothes hanger for a gun and shoots him on sight.
Worldcat

Malcolm X: A Graphic Biography
Andrew Helfer, writer; Randy DuBurke, artist
Graphic nonfiction biography charting the life and times of Malcom X from his youth as Malcolm Little to the national spokesperson for the Nation of Islam.
Worldcat

Quincredible Vol. 1: Quest to Be the Best!
by Rodney Barnes (Author), Selina Espiritu (Illustrator), Kelly Fitzpatrick (Colorist)
2019, Oni Press
Quin is a normal teen just trying to fit in. But Quin discovers a secret superpower: invulnerability. Can Quin use his new super-ability to save his family and his New Orleans community?
Worldcat

Race to Incarcerate: A Graphic Retelling
Marc Mauer, writer; Sabrina Jones, adapter and artist
2013, The New Press
Explore the causes of the exponential growth of the U.S. prison system, and how the country has produced the highest rate of incarceration in the world.
Worldcat

A Right to Be Hostile: The Boondocks Treasury
Aaron McGruder
2003, Three Rivers Press [Penguin Random House]
Collection of over 800 comic strips featuring commentary on American life, culture and politics from the perspective of two witty and insightful boys and their grandfather.
Worldcat

Showtime at the Apollo : The Epic Tale of Harlem’s Legendary Theater
Ted Fox, writer; James Otis Smith, adapter and artist
2019, Abrams ComicArts [Harry N. Abrams]
This graphic adaptation of the 1983 prose work depicts the history of the Apollo theater, as well as legendary artists that performed there.
Worldcat

Are You at Risk for “Empathy Myopia”?
Ezra Claytan Daniels
Upgrade Soul author and BTTM FDRS writer Daniels offers readers a “thought experiment” to consider the narratives we tell about ourselves, the world we live in, and how a critical evaluation of these stories might break us free.
Also available in print through Radiator Comics.

Black
Kwanza Osajyefo, writer/co-creator; Tim Smith 3, designer/co-creator; Jamal Igle, artist
2016-2017, Black Mask Studios
When a young man survives being shot by police, he discovers that he is part of a small group of Black people who possess superpowers.
Worldcat

From Truth With Truth
Lawrence Lindell
2020, Lawrence Lindell
In this “Kinda a Graphic Memoir,” Lindell shares insight into his childhood and adolescence, learning to come to terms with depression, PTSD, and Bipolar disorder in concert with his identity.
Worldcat

The Harlem Hellfighters
Max Brooks, writer, Caanan White, artist
2014, Broadway Books
Fictionalized story of the all-Black 369th Infantry. It follows members of the group from enlistment to their brave fight in World War I France and never shies away from the prejudice they encountered along the way.
Worldcat

Josephine Baker
José-Louis Bocquet, writer; Catel Muller, artist
2017, SelfMadeHero
Traces the life of the extraordinary Josphine Baker from her performances in Paris to her work with the French Resistance during World War II and her activism after the war.
Worldcat

Kindred: A Graphic Novel Adaptation
Octavia Butler, writer; Damian Duffy, adapter; John Jennings, artist
2017, Abrams ComicArts
“Butler’s most celebrated, critically acclaimed work tells the story of Dana, a young black woman who is suddenly and inexplicably transported from her home in 1970s California to the pre–Civil War South. As she time-travels between worlds, one in which she is a free woman and one where she is part of her own complicated familial history on a southern plantation, she becomes frighteningly entangled in the lives of Rufus, a conflicted white slaveholder and one of Dana’s own ancestors, and the many people who are enslaved by him.” - from the publisher.
WorldCat

The Life of Frederick Douglass: A Graphic Narrative of an Extraordinary Life
David F. Walker, writer; Damon Smyth and Marissa Louise, artists
2019, Ten Speed Press
Whether you only know of Frederick Douglass by name or are already familiar with his storied life, this comics biography will pull you in and leave you with an intimate appreciation of the celebrated abolitionist.
Worldcat

The Nib
The Nib is a webcomic publisher primarily focused on political and social commentary. Over the years, a number of creators have published invaluable work on Black experience in the United States. We have provided links to a few selections below, but it is not exhaustive.

Parable of the Sower: A Graphic Novel Adaptation
Octavia Butler, writer; Damian Duffy, adapter; John Jennings, artist
2020, Abrams ComicArts
“In this graphic novel adaptation of Octavia E. Butler’s Parable of the Sower, the author portrays a searing vision of America’s future. In the year 2024, the country is marred by unattended environmental and economic crises that lead to social chaos. Lauren Olamina, a preacher’s daughter living in Los Angeles, is protected from danger by the walls of her gated community. However, in a night of fire and death, what begins as a fight for survival soon leads to something much more: a startling vision of human destiny . . . and the birth of a new faith.” - Publisher
Worldcat

Three-Fifths a Man: A Graphic History of the African American Experience
Sid Jacobson, writer; Ernie Colón, artist
2020, MacMillan
“Through richly drawn four-color illustrations and concise, accessible chapters, Jacobson and Colón convey a history of hardship and hope—a painful and necessary process, full of victories and setbacks, from the Amistad mutiny and the Three-Fifths Compromise to Brown v. Board of Education and the Scottsboro Boys. We see the first African slaves arriving in Jamestown in 1619, watch as the ‘peculiar institution’ undermines our founding ideals, witness the triumph of the Union in the Civil War followed by the collapse of Reconstruction in the South, and observe the hard-won progress of the civil rights movement from the early twentieth century to its contemporary iterations.” -Publisher
Worldcat

Yellow Negroes and Other Imaginary Creatures
Yvan Alagbé
2018, New York Review Comics
Set in a French context among Beninese immigrants, the title story in this collection explores life as a member of an overly-scrutinized minority.
Worldcat

Your Black Friend
Ben Passmore
2016, Silver Sprocket
An exploration of the stresses and harm a Black man experiences in his everyday life through his relationships with non-Black people.
Worldcat