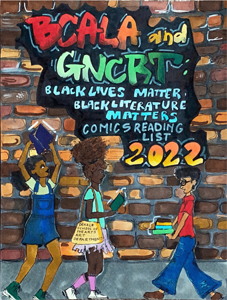 2022 Cover designed by DeKalb School of the Arts: Art Department "This artwork shows kids of different ethnic backgrounds gaining knowledge through reading. The use of bright colors brings a sense of liveliness and joy. This cover is meant to inspire kids to pick up a book to learn about other people, explore different worlds and increase awareness of self."

Across the Tracks: Remembering Greenwood, Black Wall Street, and the Tulsa Race Massacre (A)
Alverne Ball, writer; Stacey Robinson, illustrator; 2021, Megascope [Abrams ComicArts]
The majority of this comic is spent portraying the founding and development of Greenwood Avenue. Fewer pages are spent on the Tulsa Race Massacre, putting the beautiful Greenwood District first. An additional essay details the Indigenous history of Tulsa, lending important context to this historic neighborhood. WorldCat

The Adventures of Sparrowboy (J)
Brian Pinkney; 1997, Aladdin [Simon & Schuster]
In this comics-inspired picture book, a paperboy discovers he has superpowers like his hero Falconman. WorldCat

After the Rain (A)
Nnedi Okorafor, writer; John Jennings, adapter; David Brame, artist; 2021, Megascope [Abrams ComicArts]
During a dark and stormy Nigerian night, Chioma opens up the door to a supernatural entity who leaves an indelible mark on her. In order to survive the reckoning, she must confront her
identity and resolve the tumultuous feelings swirling within. WorldCat

Black and Black [AF] (A)
Kwanza Osajyefo, writer; Tim Smith 3, designer; Jamal Igle, artist; 2016-2017, Black Mask Studios
In Black, when a young man survives being shot by police, he discovers that he is part of a small group of Black people who possess superpowers. Black [AF] expands the universe and follows a Black teenage girl with superpowers living in rural Montana. WorldCat

Black Heroes of the Wild West: Featuring Stagecoach Mary, Bass Reeves, and Bob Lemmons (J)
James Otis Smith; September 2020, TOON Graphics
This nonfiction graphic novel brings to life the tales of three African American historical figures who made an impact on the Western expansion of the United States, known for their success in stage coach driving, as a US marshal, and in horsemanship. WorldCat

Black History in Its Own Words (YA)
Ronald Wimberly; 2017, Image Comics
Black history, as told through quotes from the Black men and women who shaped and made it. WorldCat

The Crossover (Graphic Novel) (J)
Kwame Alexander, writer; Dawud Anyabwile, artist; 2019, Houghton Mifflin Harcourt
Adapted from the Newbery award-winning novel in verse, this coming-of-age story features twin brothers, and their relationships to each other, to their father, and to basketball. The sequel, Booked, is slated for publication in 2022. WorldCat

Djeliya (YA)
Juni Ba; 2021, TKO Studios
In gorgeously-hued illustrations, Djeliya tells the story of the last prince of a dying West African kingdom on a quest alongside his Djeli, or storyteller, to find the mysterious wizard who destroyed his world. WorldCat

Fights: One Boy’s Triumph Over Violence (YA)
Joel Christian Gill; 2020, Oni Press
Joel faces violence at home, at school, and in his neighborhood throughout his childhood and teen years. Joel sometimes turns to violence himself, but finds better ways to cope with life. WorldCat

The Harlem Hellfighters (A)
Max Brooks, writer; Caanan White, artist; 2014, Broadway Books [Penguin Random House]
Fictionalized story of the all-Black 369th Infantry. It follows members of the group from enlistment to their brave fight in World War I France and never shies away from the prejudice they encountered along the way. WorldCat

I Am Alfonso Jones (YA)
Tony Medina, writer; Stacey Robinson, artist; John Jennings, artist; 2017, Tu Books [Lee & Low]
Alfonso Jones, a young black teen, is only trying to buy a suit when an off-duty cop mistakes a clothes hanger for a gun and shoots him on sight. WorldCat

Icon: A Hero’s Welcome (YA)
Dwayne McDuffie, writer; M.D. Bright, artist; 2009, DC Comics
Augustus Freeman, a super powered alien being crash lands on Earth and is raised by enslaved individuals in pre-Civil War America. Now a lawyer in the 1990’s, Augustus becomes a superhero with the help of a teen girl. WorldCat

Incognegro: A Graphic Mystery (New Edition) and Incognegro: Renaissance (A)
Mat Johnson, writer; Warren Pleece, artist; 2018, Berger Books [Dark Horse Comics]
In Incognegro, two fictional black reporters who are able to “pass” as white are sent to Mississippi to investigate the murder of a white woman. In the prequel, Incognegro: Renaissance, reporter Zane Pinchback goes “incognegro” for the first time to solve a murder. WorldCat

The Life of Frederick Douglass: A Graphic Narrative of an Extraordinary Life (A)
David F. Walker, writer; Damon Smyth, artist; Marissa Louise, artist; 2019, Ten Speed Press [Penguin Random House]
Whether you only know of Frederick Douglass by name or are already familiar with his storied life, this comics biography will pull you in and leave you with an intimate appreciation of the celebrated abolitionist. WorldCat

Long Way Down (YA)
Jason Reynolds, writer; Danica Novgorodoff, artist; 2020, Atheneum/Caitlyn Dlouhy Books [Simon and Shuster]
When Will’s brother is shot, he takes a long elevator ride down to seek revenge. On each floor, someone from his past gets on the elevator to show him how retaliation actually plays out. A graphic adaptation of the popular novel in verse. WorldCat

Malcolm X: A Graphic Biography (YA)
Andrew Helfer, writer; Randy DuBurke, artist; 2006, Hill & Wang [Macmillan]
Graphic nonfiction biography charting the life and times of Malcom X from his youth as Malcolm Little to the national spokesperson for the Nation of Islam. WorldCat

Miles Morales: Shock Waves (J)
Justin A. Reynolds, writer; Pablo Leon, artist; 2021, Graphix [Scholastic]
When a natural disaster strikes his mother’s homeland of Puerto Rico, Miles (a.k.a. Brooklyn’s own friendly neighborhood Spider-Man) and his friends rush to save the day with a fundraising block party. But they soon discover that the philanthropic CEO who is helping them plan the party seems to have ulterior motives. WorldCat

New Kid and Class Act (J)
Jerry Craft; 2019 & 2021, HarperCollins
Jordan and Drew are two Black middle schoolers at the predominantly white Riverdale Academy Day School, where they navigate microaggressions, tokenism, and not fitting in. In addition to winning the Coretta Scott King Award and other prestigious awards, New Kid is also the first graphic novel to win the Newbery Award. WorldCat

The Nib (A)
The Nib is a webcomic publisher primarily focused on political and social commentary. Over the years, a number of creators have published invaluable work on Black experience in the United States. We have provided links to a few selections below, but it is not exhaustive.

Nubia: Real One (YA)
L.L. McKinney, writer; Robyn Smith, art; 2021, DC Comics
Nubia may have superhuman strength like Wonder Woman, but in a society that would rather see her as a threat, she has to hide her powers to stay safe. When a member of the richest and most powerful family in town starts harassing her best friend, Nubia has to decide whether to stay in the shadows or embody the hero she knows she is. WorldCat

Parable of the Sower: A Graphic Novel Adaptation (A)
Octavia Butler, writer; Damian Duffy, adapter; John Jennings, artist; 2020, Abrams ComicArts
Set in the year 2024 in Los Angeles, main character Lauren lives in a harmonious neighborhood surrounded by walls for protection. Lauren keeps a journal and develops a new belief system called Earthseed. One summer, the walls around her neighborhood come down after an attack, and Lauren is forced to travel north through dangerous areas to find a new home. This book is published as a graphic novel adaptation of Octavia E. Butler’s Parable of the Sower. WorldCat

Quincredible Vol. 1: Quest to Be the Best! (YA)
by Rodney Barnes, author; Selina Espiritu, illustrator; Kelly Fitzpatrick, colorist; 2019, Lion Forge Comics [Oni Press]
Quin is a normal teen just trying to fit in. But Quin discovers a secret superpower: invulnerability. Can Quin use his new super-ability to save his family and his New Orleans community? WorldCat

A Right to Be Hostile: The Boondocks Treasury (YA)
Aaron McGruder; 2003, Three Rivers Press [Penguin Random House]
Collection of over 800 comic strips featuring commentary on American life, culture and politics from the perspective of two witty and insightful boys and their grandfather. WorldCat

Shortcut (J)
Donald Crews; 1992, HarperCollins
In this picture book, a group of children encounter a freight train after taking a shortcut on the tracks. WorldCat

Showtime at the Apollo : The Epic Tale of Harlem’s Legendary Theater (YA)
Ted Fox, writer; James Otis Smith, adapter and artist; 2019, Abrams ComicArts
This graphic adaptation of the 1983 prose work depicts the history of the Apollo theater, as well as legendary artists that performed there. WorldCat

Tales of the Talented Tenth: No. 2, Bessie Stringfield (J)
Joel Christian Gill; 2016, Fulcrum Publishing
A graphic biography of Bessie Stringfield, a Black woman who rode a motorcycle across the United States eight times in the 1930s and 1940s. WorldCat

When Stars Are Scattered (J)
Omar Mohamed, writer; Victoria Jamieson, writer and artist; Iman Geddy, colorist; 2020, Dial Books for Young Readers [Penguin Random House]
Omar is a Somali kid living in a refugee camp in Kenya after losing his parents in the war. Omar is desperate to change his life for the better and must figure out a way to go to the camp’s school while still taking care of his brother, Hassan, who has disabilities and is nonverbal. WorldCat

When the Beat Was Born: DJ Kool Herc and the Creation of Hip Hop (J)
Laban Carrick Hill, writer; Theodore Taylor III, artist; 2013, Roaring Brook Press [Macmillan]
This picture book introduces the beginnings of hip hop in the 1970s and 1980s through the biography of DJ Kool Herc, starting on the island of Jamaica and moving to the Bronx, NYC. WorldCat

Woke Baby (J)
Mahogany Browne, writer; Theodore Taylor, illustrator; 2018, Roaring Brook Press
This board book reframes the natural tendencies of babies in terms of what it means to be woke. WorldCat

Your Black Friend and Other Strangers (A)
Ben Passmore; 2018, Silver Sprocket
The title comic is an exploration of the stresses and harm a Black man experiences in his everyday life through his relationships with non-Black people. Other comics, ranging from hilarious to poignant, tackle such subjects as gentrification, dating, art, religion, and others. WorldCat

Yummy: The Last Days of a Southside Shorty (YA)
G. Neri, writer; Randy DuBurke, artist; 2010, Lee & Low Books
A fictional retelling of the life of 11-year-old Robert “Yummy” Sandifer, which attempts to explain the circumstances that turned a young boy from candy-loving child to gun-wielding gang member. WorldCat

Black Comics: Politics of Race and Representation (A)
Sheena C. Howard and Ronald L. Jackson II, editors.; 2013, Bloomsbury USA Academic
Provides a collection of articles in order to share the history of black comics, from early comic strips to recent comics and manga, as well as the representation of race, gender, and politics within comics. WorldCat

Invisible Men: The Trailblazing Black Artists of Comic Books (A)
Ken Quattro; 2020, Yoe Books
A collection of biographies about black artists who worked behind the scenes in the early days of comics. Includes samples of their works. WorldCat