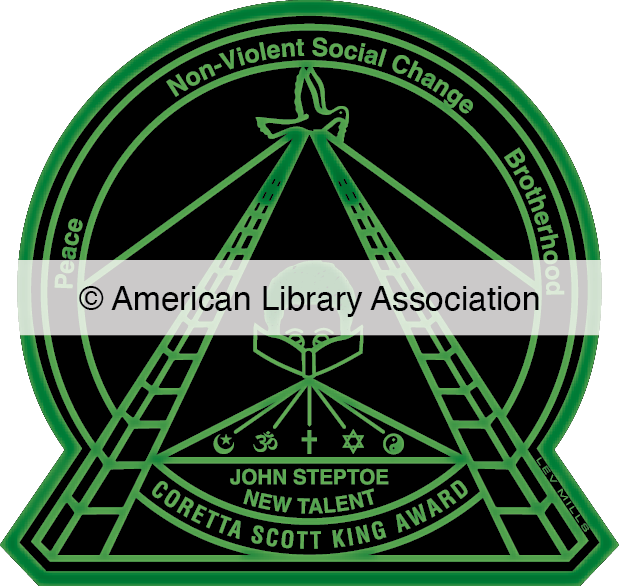 The John Steptoe New Talent Award is established to affirm new talent and to offer visibility to excellence in writing and/or illustration which otherwise might be formally unacknowledged within a given year within the structure of the two awards given annually by the Coretta Scott King Book Awards Committee.

The criteria for eligibility is the same as those for the writing and illustration awards, with the exception that the winner(s)' published works cannot exceed three in number. An author or illustrator who has already received or has just been selected to win one of the Coretta Scott King Book Awards in the current year is not eligible for the John Steptoe Award for New Talent. An author may receive this award one time.

One award will be presented annually for text or illustrations. The Committee may choose to select one book for writing and a second book for illustration. The award need not be given if the committee so decides in a particular year.

Amber McBride, author of Me (Moth)  (Feiwell and Friends, an imprint of Macmillan Publishing Group)

Regis and Kahran Bethencourt, illustrators of The Me I Choose to Be (Little, Brown, and Company)

April Harrison, illustrator of What is Given from the Heart  (Schwartz & Wade Books, an imprint of Random House Children’s Books, a division of Penguin Random House LLC.)

David Barclay Moore, author of The Stars Beneath Our Feet (Alfred A. Knopf, an imprint of Random House Children’s Books, a division of Penguin Random House LLC.)

Nicola Yoon, author of The Sun Is Also a Star (Delacorte Press, and imprint of Random House Children's Books, a division of Penguin Random House LLC)

Jason Reynolds, author of When I Was the Greatest (Atheneum Books for Young Readers, an imprint of Simon & Schuster Children's Publishing Division).

Victoria Bond and T. R. Simon, authors of Zora and Me (Candlewick Press).

Kekla Magoon, author of The Rock and the River (Aladdin, an imprint of Simon & Schuster Children’s Publishing Division)

Sundee T. Frazier, author of Brendan Buckley's Universe and Everything in It (Delacorte Press, an imprint of Random House Children's Books)

Traci L. Jones, author of Standing Against the Wind (Farrar, Straus and Giroux)

Jaime Adoff, author of Jimi & Me (Jump at the Sun, an imprint of Hyperion Books for Children)

Barbara Hathaway, author of  Missy Violet and Me (Houghton Mifflin)

Sharon Flake, author of The Skin I'm In (Jump at the Sun/Hyperion)

Martha Southgate, author of Another Way to Dance (Delacorte)

Sharon Draper, author of Tears of a Tiger (Simon & Schuster)

The Coretta Scott King Book Awards Winner, Honor, and John Steptoe Award for New Talent seals are property of the American Library Association and cannot be used in any form or reproduced without the permission of the ALA Office of Rights and Permissions.