From Washington, D.C., the current outlook for libraries is as promising as it is challenging. The administration’s threats to severely cut federal library funding for FY2018 had the effect of galvanizing support for libraries. ALA advocates rallied in unprecedented numbers to voice their support for federal library funding at strategic points throughout the year. Through countless emails, phone calls, and meetings with congressional staff, ALA advocates reminded members of Congress in every state and congressional district how indispensable libraries are for the communities they represent.

After a year of vigorously defending the Institute of Museum and Library Services (IMLS) and federal policies that impact public access to information, America’s libraries have emerged with renewed energy, fortitude, and a measure of success. By the time FY2018 officially began in October 2017, the Appropriations Committees from both houses of Congress had passed bills that maintained (and in the Senate, increased by $4 million) funding for libraries. When the White House FY2019 budget again proposed to eliminate IMLS, ALA President Jim Neal immediately responded with confidence, saying “there is bipartisan support for libraries in Congress, where decision-makers know that to cut funding for libraries is to undercut opportunity for their constituents.”

Fortunately, Congress passed and President Trump signed an FY2018 omnibus spending bill on March 23 that includes significant federal funding increases for our nation’s libraries. ALA advocates have helped libraries win $9 million more for IMLS than it had in FY2017, including $5.7 million for the Library Services and Technology Act. 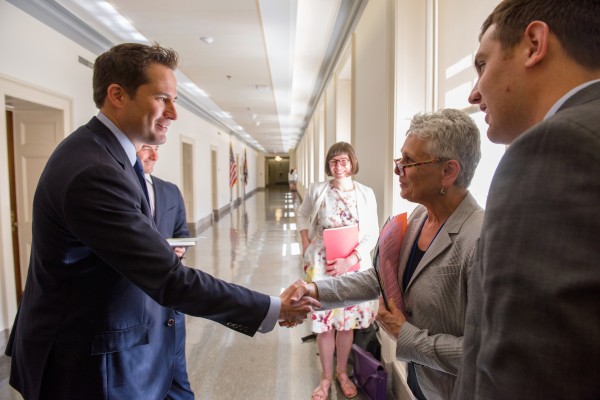 There is also cause for optimism, not only with regards to federal funding, but also to government information access. At least half a dozen bills were introduced to increase government transparency and make more taxpayer-funded data available free to the public. On top of the good news about FY2018 funding for libraries, Congress added a policy provision that has been on ALA’s advocacy agenda for years: Congressional Research Service (CRS) reports will now be published online by the Library of Congress, ensuring for the first time permanent public access to valuable government information. Also, Congress began the process of modernizing the Federal Depository Library Program (FDLP) for the first time since the 1960s. Library stakeholders convened by ALA’s Washington Office submitted recommendations to make the FDLP relevant for future generations of information users.

Even amid setbacks on major issues like network neutrality, libraries gained a foothold. In the face of the Federal Communications Commission’s inevitable rollback of the Open Internet Order, thousands of ALA members filed comments with the FCC as part of a massive groundswell of support for network neutrality. Libraries offered a unique voice to the debate and are viewed in Washington as a valued, sought-after partner in national public policymaking.

In preparation for the 75th anniversary of ALA’s Washington Office, ALA is developing new resources and expanding capacity to facilitate advocacy for libraries. This year the ALA Policy Corps, a presidential initiative of Jim Neal, was established to cultivate a cadre of policy experts ready to lead targeted advocacy work at the national level and mentor a new generation of advocates. While National Library Legislative Day, which drew more than 500 library supporters to Washington in 2017, will remain ALA’s premiere event on Capitol Hill (and is scheduled for May 7–8 in 2018), ALA is taking steps to increase direct advocacy in congressional districts.

America’s libraries are poised to make even greater strides in advocacy in 2018—not just in greater numbers, but in deeper engagement in year-round advocacy.

ALA’s Center for the Future of Libraries has identified numerous trends that will affect libraries. The following are three of the most prominent.

Aging. An aging workforce and population will change the US and other developed nations, impacting the workplace, government budgets, policy, and family life. An increasing life expectancy will require adequate retirement income and access to health care for aging adults. Adults may continue to work past traditional retirement ages. For libraries, this could mean a change in the profile of their users, especially in academic, medical, and special libraries, and in the profile of librarians and library professionals.

Income inequality limits the upward mobility of people, especially the ability of those at the bottom of the distribution to rise. Library services in support of skills development will likely become more important, especially for administrators and funders, but libraries will need to make sure the skills they seek to develop align with the types of skills needed in the economy, especially STEM skills.

The library space—or any opportunities the library provides that bring different people together—could be especially important in combating income inequality. High-income and low-income people increasingly live in separate spaces, with city governments, schools, and communities more fragmented and less inclusive than before. Spaces and programs that bring people together may help improve the dialog across inequality and provide important economic opportunities for the community.

Connected learning. Social and digital media available via the internet connect students and young people to each other and to a host of formal and informal educators, providing limitless opportunities to seek and acquire new knowledge and skills.

Connected learning happens across learning networks including school, home, libraries, and community centers. Connected learning also supports the idea that learners achieve best when learning is reinforced and supported in multiple settings, providing opportunities for libraries to engage other institutions as partners in connected learning environments.

In order for connected learning to help level the playing field between the haves and have-nots, students must have regular access to new and emerging technologies and the internet. Libraries that offer access to these will be better able to integrate themselves into connected learning environments.