Academic, school, and public libraries continue to face an uncertain economy as they shift resources and services to meet the needs of the 21st-century digital world. The American Library Association launched a new public awareness campaign, called “Libraries Transform,” in 2015. Libraries Transform seeks to shift the mindset that “libraries are obsolete or nice to have” to “libraries are essential,” and change the perception that “libraries are just quiet places to do research, find a book, and read” to “libraries are centers of their communities: places to learn, create, and share, with the help of library staff and the resources they provide.” The Libraries Transform campaign is designed to increase public awareness of the value, impact, and services provided by library professionals and libraries of all types.

About half of the chief academic officers at US colleges and universities believe their institutions have not yet recovered from the 2008 economic downturn. The pressure on higher education to demonstrate value remained the top issue facing academic libraries.

The Association of College and Research Libraries Assessment in Action program, funded by an Institute of Museum and Library Services grant, lends support to the growing body of evidence demonstrating the positive contributions of academic libraries to student learning and success in five key areas:

The value of certified school librarians continues to grow as administrators and teachers seek education resources to better serve tech-savvy students. Among other things, administrators are looking to school librarians to help them incorporate digital educational resources and lead blended-learning activities in schools, resulting in more equity, connectivity, and personalization to instruction.

In the last six years, school librarians have seen significant changes both in what they are providing to teachers and students, as well as the challenges they are confronting to support digital content. In 2010, for example, only 35% of school librarians indicated they were acquiring digital content. By 2015, that number had increased to 69%. This trend is reflected across a variety of formats, particularly databases, ebooks, periodicals, videos, and games.

The vital role public libraries play in communities has expanded to include services and programs for childhood literacy, computer training, and workforce development. Librarians know their programs and services have an impact, but many libraries do not have the measures and tools to demonstrate the difference they make in the lives of their patrons.

Public libraries are continually required to assess their value. To receive funding, they must provide more than just attendance and circulation counts. Traditional output data only captures quantitative data, or how much is done; libraries are increasingly seeking to measure quality, or the good that is done. As a result, more libraries are conducting outcome measurements to better demonstrate their impact on their community members. 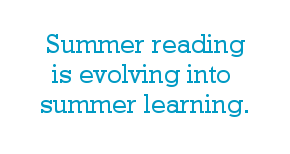 Libraries are responding to the ever-changing needs of children and teens. Summer reading, a longstanding campaign in public libraries, is evolving into summer learning. Summer programs have flourished in recent years; they now integrate traditional reading activities with others that explore such special interests as the arts, STEM (science, technology, engineering, and math), and digital learning.

Libraries are using design thinking to reimagine services and spaces for teen patrons, and they are also experimenting with ways to help teens apply design thinking to their own learning experiences. Opportunities for teen creativity include dedicated makerspaces, tinkerlabs, and other reconfigurations of the library’s space.

Adults find libraries a place for lifelong learning with resources and programs useful in exploring new ideas, personal interests, and careers. Increasingly, libraries also offer patrons a neutral space to meet their neighbors and discuss and resolve important issues. In 2015, libraries continued to strengthen their role as leaders in community engagement, leading community forums, taking part in anti-violence activities, and providing a safe, neutral place for an increasingly divided populace to come together.

Library books and other materials continue to be challenged. In July 2015, a Harris poll on attitudes about book banning and school libraries revealed that out of the 2,244 US adults who participated, the percentage (28%) who felt that certain books should be banned increased by more than half since the previous survey (18%) conducted in 2011.

Out of 275 challenges recorded by the American Library Association’s (ALA) Office for Intellectual Freedom, the “Top Ten Most Challenged Books in 2015” are:

Library professionals are empowered to turn challenges into opportunities through the high quality of their education. Enhancement of the professional library degree got a boost with the release of the 2015 Standards for Accreditation of Master’s Programs in Library and Information Studies and a fourth edition of its process manual, Accreditation Process, Policies, and Procedures (AP3).

Privacy in the digital age is an ongoing concern of libraries. Both the American Library Association (ALA) and the National Information Standards Organization (NISO) released guidelines on developing effective privacy protection policies for digital data. The ALA Intellectual Freedom Committee and its Privacy Subcommittee released Library Privacy Guidelines for E-book Lending and Digital Content Vendors, while NISO developed and released its NISO Consensus Principles on Users’ Digital Privacy in Library, Publisher, and Software-Provider Systems. Both sets of guidelines highlight the fact that digital privacy cannot be maintained only by libraries and requires the coordinated support of many stakeholders.

Although most library funding originates at the local and state level, federal support is also an important segment of library revenue. The majority of federal library program funds are distributed to each state through the Institute of Museum and Library Services. The Library Services and Technology Act (LSTA), a major source of library funding, is part of the annual Labor, Health and Human Services, and Education appropriations bill. LSTA grants totaled $180.9 million for FY2015. Additional federal funding for school libraries takes place through the Innovative Approaches to Literacy program, which received $25 million in funds during FY2015.